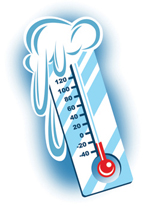 When it comes to tourism and de­velopment, big bucks tend to flow into areas that can boast of warm temperatures and sun-splashed fun.

Then there’s the—almost literally—polar opposite of that, places where residents celebrate bone-chilling deep freezes that can be en­dured by only the hardiest of souls.

These places might actually relish being known as the Icebox of the Nation—even con­sider it a badge of honor, something worth fighting for.

International Falls, Minn., and Fraser, Colo., are locked in such a battle. Both towns claim ownership of the Icebox designation and have taken the issue to court.

The slogan had been used by both towns for years when Fraser agreed to use the slogan only in Colorado in the late 1980s. Int’l Falls had a trademark on it but let it lapse. Fraser noticed and applied for the trademark in November, which led to the current court clash.

International Falls city attorney Joseph Boyle, who claims that local radio shows first used the slogan in the 1940s, says the matter will come down to the issues of original use and continuous use.

Fraser’s mayor at one time jokingly suggested the matter be settled by a snowshoe race. The mayor of Int’l Falls countered with the suggestion of a snowball fight.

Fraser town manager Jeff Durbin says both communities have a passion for who they are, and he hopes the matter can be settled amicably.