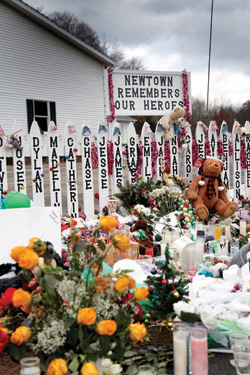 The victims of the mass school shooting are remembered at Sandy Hook Elementary School in Newtown, Conn., on Christmas Day, 2012. Photo by Rex Features via AP Images.

More than a year after a single armed assailant killed 20 children and six adults at a school in Newtown, Conn., Congress has yet to pass any major legislation to reduce gun violence in the United States. To ABA President James R. Silkenat, that failure to act can be summed up in one word: unacceptable.

Addressing gun violence has been a priority for Silkenat—a partner at Sullivan & Worcester’s New York City office, who owns a farm near Newtown—since he became ABA president in August 2013. “I’m still heartsick that Congress was unable to respond to the tragedy that took place in Newtown,” said Silkenat in an emotional speech to the House of Delegates in February during the 2014 ABA Midyear Meeting in Chicago. “This is a tough topic. There are strong views on all sides. But I think we have a responsibility to participate in a discussion on the legal issues involved and try to educate the public and again our Congress about what our Constitution requires and what it does not.” (Read the ABA’s position on federal legislation relating to gun violence.)

Silkenat returned to that theme on March 6 at a program co-sponsored by the ABA Standing Committee on Gun Violence and the Office of the Mayor of Philadelphia. “We hope to engage all perspectives as we move forward with some commonsense policies that prevent gun violence and protect our Second Amendment rights,” Silkenat said in his keynote speech at the conference, titled “Taking Aim at Gun Violence: The Myth and Meaning of the Second Amendment.” The event was held at the National Constitution Center, and it brought together legal experts, public health researchers, academics and representatives of advocacy groups.

By and large, the speakers were not satisfied with current policies on gun violence in the United States, and recent statistics help to explain why.

About 30,000 Americans are killed by guns every year (about two-thirds of them are suicides), according to 2010 statistics collected by the U.S. Centers for Disease Control and Prevention in Atlanta. Another 73,000 people seek treatment in hospital emergency rooms for gun injuries, the CDC estimates. In addition, researchers at Yale University estimate that some 10,000 children and adolescents a year are hospitalized or die after being injured by guns.

This is an “unacceptable public health burden,” said Jon S. Vernick, deputy director of the Center for Injury Research and Policy at the Johns Hopkins Bloomberg School of Public Health in Baltimore, at the gun violence conference. But enacting laws to address gun violence is a tough sell in a country with a strong tradition of gun ownership (about one-third of American households possess a gun), and a powerful lobby of passionate gun enthusiasts who, spearheaded by the National Rifle Association, vigorously defend what they believe is a constitutionally protected right to keep and bear arms without government interference.

“When it comes to our federal gun laws, they are completely irrational. They don’t make sense, and they are filled with loopholes,” said Juliet Leftwich, legal director of the San Francisco-based Law Center to Prevent Gun Violence, who serves as a special adviser to the ABA’s Gun Violence Committee. “The U.S. has the weakest gun laws of all industrialized nations in the world. We also have the highest rates of gun deaths.”

One major loophole is the failure to require background checks for private sales of firearms—which account for some 40 percent of all sales—making it difficult to prevent illegal gun trafficking and keep guns from falling into the hands of felons, minors, the mentally ill or individuals under restraining orders in domestic violence cases. Also, Congress allowed a 1994 federal ban on the sale of certain types of assault rifles and high-capacity gun magazines to expire in 2004. Despite a number of high-profile mass shootings, the trend in state law over the past 30 years has been to weaken gun regulation, culminating in a recent spate of what Leftwich called “crazy” laws, such as statutes to allow guns in churches, bars and courthouses. “One big area is the weakening of concealed carry laws,” she said.

But Leftwich maintained that public revulsion over the Newtown shootings “really triggered a cultural shift.” In the five years before the Newtown shootings, the Law Center to Prevent Gun Violence tracked the passage of twice as many state laws relaxing gun restrictions as measures tightening them. After Newtown, this ratio flipped.

Still, federal legislation to close the background check loophole and to reauthorize the assault weapons ban (both supported by the ABA) failed in Congress last spring, only months after the Newtown massacre.

Meanwhile, recent U.S. Supreme Court rulings have complicated the legal landscape for gun regulation. In 2008, the court ruled for the first time that the Second Amendment protects the right to keep and bear arms other than for service in a militia. 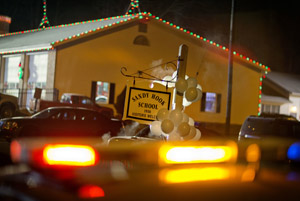 Former Pennsylvania Gov. Edward Rendell: “Everyone talks about how great the first responders were, or the bravery of the teachers or the people who were involved in trying to help. The president gives a great speech and we all engage in prayer, and nothing changes until we have the next incident.” AP Photo/David Goldman

AN AMENDMENT OF FEW WORDS

The Second Amendment contains a total of 27 words: “A well-regulated militia being necessary to the security of a free state, the right of the people to keep and bear arms shall not be infringed.” But it is one of the most controversial provisions in the Constitution. For most of the nation’s history, courts interpreted the amendment to recognize the right to keep and bear guns for militia service alone, said panelist Erwin Chemerinsky, a constitutional scholar and law dean at the University of California at Irvine. “When I began teaching constitutional law 34 years ago in 1980, I spent very little time on the Second Amendment,” he said. “There was no dispute to the meaning of the Second Amendment. It was just what it said.”

That changed with the 2008 Supreme Court decision in District of Columbia v. Heller, which overturned a Washington, D.C., law that effectively banned handguns in the district. Writing for the 5-4 majority, Justice Antonin Scalia described the opening clause of the Second Amendment as “prefatory” and ruled that the final clause affirmed the right of individuals to keep guns in the home for the purpose of personal security. Since the District of Columbia is governed directly by laws adopted by Congress, it took a second Supreme Court ruling—McDonald v. Chicago—to extend this right to the states.

But Chemerinsky emphasized that the rulings apply only to the right of individuals to keep guns in their homes for the purpose of personal safety. Chemerinsky noted that Scalia wrote in Heller that “nothing in our opinion should be taken to cast doubt on long-standing prohibitions on the possession of firearms by felons and the mentally ill, or laws forbidding the carrying of firearms in sensitive places such as schools and government buildings, or laws imposing conditions and qualifications on the commercial sale of arms.”

Left unresolved was the level of scrutiny that courts should apply to gun regulation. The lowest level of scrutiny, Chemerinsky explained, would be a rational-basis test; that is, the courts would defer to the government if the law is reasonable.

But a higher standard of strict scrutiny must be applied if a law impinges on a fundamental right. In such a case, the government must provide a compelling purpose for the law and prove that no less-restrictive way of achieving that purpose is available.

Without Supreme Court guidance, lower courts have split on the level of scrutiny to apply to gun regulations. In general, however, courts tend to uphold them. “I can probably count on the fingers of one hand,” Chemerinsky said, “the number of decisions that have struck down gun regulations.”

Meanwhile, gun control advocates have won some important victories through litigation. Jonathan E. Lowy, director of the Legal Action Project at the Brady Center to Prevent Gun Violence, described how his organization has sued to put “bad apple” gun shops—the estimated 1 percent of gun stores that skirt existing law—out of business, spurred gun manufacturers to improve gun safety, and sought to overturn laws like a Florida statute that barred physicians from talking about guns and their health dangers with patients.

But former Pennsylvania Gov. Edward G. Rendell told the conference that real change will only come when gun control advocates take a cue from gun rights advocates and become “single-issue voters,” flooding their elected representatives with calls and emails about gun legislation.

Otherwise, Rendell predicted, there will be other tragedies like Newtown, after which “there will be a ceremony. Everyone talks about how great the first responders were, or the bravery of the teachers or the people who were involved in trying to help. The president gives a great speech and we all engage in prayer, and nothing changes until we have the next incident. And then we have another ceremony. I don’t know about you, but I’m sick of it.”

This article originally appeared in the May 2014 issue of the ABA Journal with this headline: “Small Victories: Search goes on for policies that pass Second Amendment muster and help prevent gun violence.”