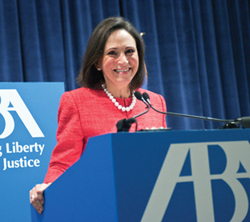 Coming as it does at roughly the halfway point of the ABA year, the aptly named midyear meeting gives the association’s leadership a chance to collectively catch its breath and measure progress on various initiatives and policy priorities.

In an interview with the ABA Journal a few weeks before the Feb. 3 meeting in Orlando, Fla., President Carolyn B. Lamm said she is optimistic about the ABA’s general direction and achievements on a number of fronts.

“I’m very encouraged about where we are,” said Lamm, a partner at White & Case in Washington, D.C. Her term will end at the close of the annual meeting in San Francisco. “We’ve made progress on every issue we’ve addressed.”

Two of Lamm’s presidential initiatives will be prominent at the midyear, which runs through Feb. 9.

The ABA Commission on Ethics 20/20 will hold the first in a series of public hearings to receive input on issues relating to the regulation of lawyers in the United States during an era of increasing globalization and advances in technology. Lamm appointed the commission shortly after starting her term in August 2009. Its name recalls the Ethics 2000 Commission that conducted a full review of the ABA Model Rules of Professional Conduct a decade ago, but Lamm gave the new commission an even broader mission—to look at lawyer regulation in a global context. 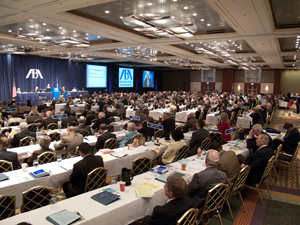 “There have been such dramatic changes in the law in the past decade or so,” she said. “We must assess what best practices are in how the legal profession is regulated.”

The issues the commission plans to address include several that arise because U.S. lawyers continue to be regulated by states in which they are licensed even though their work takes them increasingly across state lines and even international borders. The commission also will look at how technology enhances cross-border practice by lawyers.

The 15-member commission is co-chaired by Jamie Gorelick, a former U.S. deputy attorney general who now is a partner at Wilmer Cutler Pickering Hale and Dorr in Washington, D.C., and Michael Traynor, a lawyer in Berkeley, Calif., who chairs the council of the American Law Institute.

Lamm also appointed the Presidential Commission on Diversity to follow up on recommendations from the ABA National Summit on Diversity that was held in June during the term of her predecessor, H. Thomas Wells Jr. of Birmingham, Ala.

DUE FOR A CHANGE

The midyear meeting agenda includes a program on Feb. 5, titled “Smart Soloing: Success Strategies for Diverse Lawyers,” that is part of a distance learning series being presented by the commission to address various practice issues from the perspectives of race, ethnicity, disability, gender, sexual orientation and gender identity. Lawyers around the country will be able to view a webcast of the program as it is being presented live in Orlando. (The series is supported in part by funding from LexisNexis.)

At another midyear meeting program, the commission will present a report evaluating possible next steps for improving diversity in the legal profession that was prepared by an advisory group using information gathered in conjunction with last year’s diversity summit.

A key proposal likely to come before the ABA’s policymaking House of Delegates in Orlando would outline a new dues structure for association members. Details of the proposal may not be finalized until just before the midyear meeting, but Lamm said she wants to see an approach that departs from the pattern of increasing dues every three or four years. (The House last approved a dues increase in 2006.)

ABA membership currently accounts for 30-35 percent of licensed lawyers in the United States, but Lamm said that number must be improved. “My objective is to increase the ABA market penetration to 50 percent of the profession,” she said, “and you can’t do that under the current structure.”