Heard the One About the Lawyer? Comedians-at-Law Troupe Hits the Road 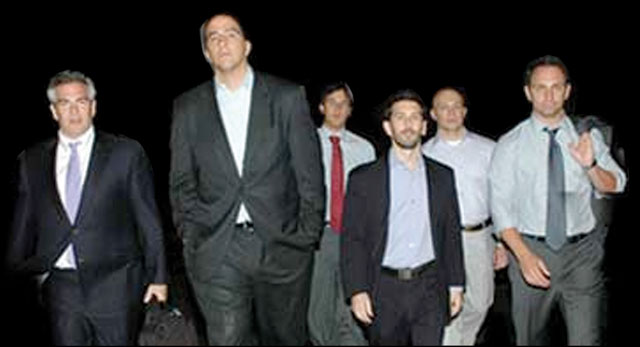 Greg Collett has worked in law, banking and politics. Tired of having jobs that made people hate him, he decided to give comedy a try.

“I think there’s no profession other than law that drives so many people to work hard and succeed,” says Collett, who with five other attorneys recently formed the Comedians-at-Law comedy troupe. “It’s just that it’s often in some other profession.”

The group plans to take its show on the road this year with a nationwide law school tour dubbed Lawmageddon.

Law school student-body representatives have hired the attorneys to perform either on campus or at comedy clubs, for the most part. Matt Ritter, another Comedians-at-Law member, says they plan to keep most of the joke-telling positive.

The tour was to kick off in late January at Vanderbilt Law School and move on to scheduled stops in Washington, D.C., Chicago and Hollywood before ending in New York City in April.

“We’ve had a great reaction whenever we’ve done this,” says Collett, who also has a practice representing defrauded investors. He met Ritter and the other members—Alex Barnett, J-L Cauvin, Sebastian Evans and Kevin Israel —in the New York comedy scene.

Ritter, who started his legal career as a corporate lawyer at Mayer Brown, has moved from New York to Los Angeles to further his comedy career. He also does occasional document review work and drew on the experience to make the Web series “The Bottom Rung,” which is featured on the Bitter Lawyer blog.

“When I first quit law to do comedy, I did not do law-based humor,” Ritter says. “Only later did it occur to me that there is this whole niche I know about that others can relate to.”