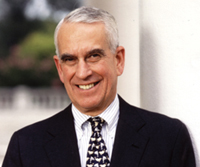 Social security, medicare and medicaid hardly register on the radar of U.S. high school students. But maybe they ought to.

After all, there is a strong likelihood that, without strong action by the federal government to reform those programs, they will have largely run out of money to pay full benefits to recipients while children now attending elementary and high school are in the workforce.

With that in mind, the ABA Senior Lawyers Division is working with two other groups to produce teaching materials to make the future of government programs that primarily support older adults a palatable topic for younger people whose priority lists are filled with such things as pep rallies, proms, summer jobs and college entrance exams.

“It seemed these issues were so important that we needed to reach out to a wider constituency,” says Leigh B. Middleditch Jr., a past chair of the division and currently a vice president at McGuireWoods Consulting in Charlottesville, Va.

Complicating efforts to create a productive public dialogue about Social Security, Medicare and Medicaid is the potential these issues have to pit the interests of different generations against each other. That concern was at the center of a program held during the 2009 ABA Annual Meeting.

The Senior Lawyers Division presented the program as a debate between two generations of lawyers on the future of Social Security, Medicare and Medicaid. The moderator was Bill Robinson of Florence, Ky., a member of the division’s council and ABA president-elect nominee. Robinson is member-in-charge of the northern Kentucky offices of Frost Brown Todd.

“Social Security has been described as the third rail of American politics: Touch it and you’ll get burned,” said Erin L. Ginsberg, one of the two young lawyers—both from Philadelphia—who participated in the multigenerational debate. “But it is approaching insolvency, and something must be done. People in my generation have no expectation that Social Security will be there for us.”

The senior lawyers participating in the debate didn’t offer much comfort. “Can any of us receive tomorrow what others have received in the past? I don’t think we can,” said Robert J. Grey Jr., a past ABA president who is a partner at Hunton & Williams in Richmond, Va. And Ruth L. Kleinfeld, a federal administrative law judge in Manchester, N.H., said, “Older people are willing to share the burden” of paying for government programs, “but we can’t bear it alone.”

While the program held up on its own merits, it also had another purpose. The Senior Lawyers Division worked with the Youth Leadership Initiative at the University of Virginia’s Center for Politics in Charlottesville to record the program and convert segments of it into four 10-minute podcasts. Those podcasts are being packaged with lesson plans and other materials that teachers may use to help students learn about Social Security and health care reform, and about how to discuss issues in a debate setting. The materials will be posted on the initiative’s website this summer.

Some 50,000 teachers around the United States are registered on the initiative’s website, says Meg Heubeck, director of instruction for the initiative. An effective teacher can get students to focus on even the most difficult issues, she says, but “having good materials is really, really important.”

Materials from the multigenerational debate also are being adapted by Public Agenda, an organization in Washington, D.C., that seeks to increase citizen engagement on policy issues, for use in classroom programs teaching journalism students about public finance issues.

Heubeck and others involved with the project credit Middleditch for bringing them together, especially through their shared affiliations at the University of Virginia. The project is supported by private funding but is part of the ABA’s mission.

Middleditch says coordinating the effort was an important function. “The ABA obviously has an interest in addressing topics of interest to the general citizenry,” he says, “and people have got to be interested in how to get their arms around these entitlement programs.”

The following videos contain highlights from the Intergenerational Debate on Reforming Social Security, Medicare and Medicaid that was held during the 2009 ABA Annual Meeting. First, two young lawyers voice their concerns about the future of those programs and offer ideas on how to fix them. In the final segments, ABA Past President Robert J. Grey Jr. offers his perspectives on the issue.