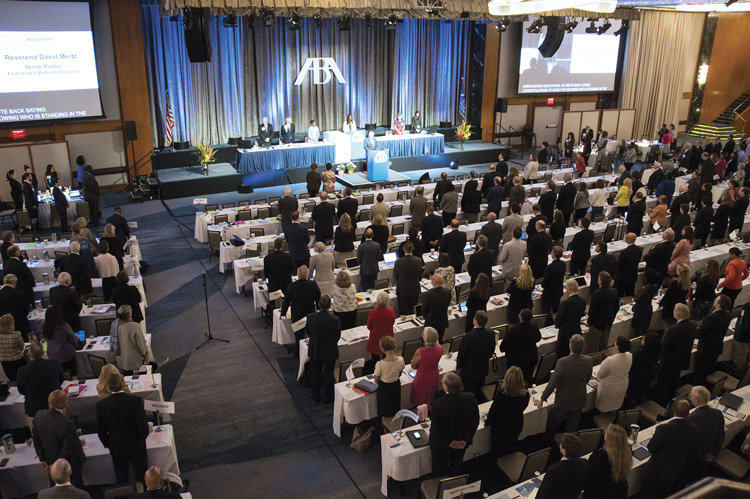 Photo of the House of Delegates meeting by ABA Communications

The ABA House of Delegates approved several criminal justice resolutions calling for changes that would affect poor and homeless people, juveniles and those denied the right to effective counsel.

The measures include a call for bail reform, a ban on solitary confinement for juveniles, and authorization of civil actions for systemic violations of the right to counsel. The ABA Criminal Justice Section sponsored or co-sponsored most of the measures.

Resolution 112C urges governments to adopt policies and procedures that favor release on personal recognizance bonds or unsecured bonds, and that permit cash bonds only after a court determines the financial condition is the only way to ensure appearance. The resolution also states that pretrial detention should never occur solely because of an inability to pay, and “bail schedules” that consider only the nature of the offense should not be used.

Policies should allow courts to order defendants to be held without bail, however, where public safety warrants pretrial detention and no conditions of pretrial release would suffice, according to the resolution.

Resolution 112D urges governments to bar the use of bail and bond in juvenile cases, to use objective criteria for pretrial release that don’t have a discriminatory impact, and to use the least restrictive conditions of release that protect public safety and ensure likely appearance in court.

At the beginning of the ABA Annual Meeting, the association filed an amicus brief, calling the Harris County, Texas, use of a bail schedule unconstitutional.

The House also approved a late-offered resolution backing a ban on mandatory minimum sentences, while sponsors withdrew another late-sentencing resolution after hearing from the U.S. Justice Department.

Resolution 10B opposes the imposition of mandatory minimum sentences in any criminal case. The resolution calls on Congress and state legislatures to repeal laws requiring mandatory minimums and to refrain from adopting such laws in the future.

The withdrawn proposal, Resolution 10A, would have urged the Department of Justice to rescind a policy adopted in May by Attorney General Jeff Sessions that directs federal prosecutors to charge and pursue the most serious, readily provable offense.

Neal Sonnett, representing the Criminal Justice Section, said the Justice Department did not voice an objection until the House session had begun. The department indicated it believed there were errors in the section report, and it wanted to continue discussions, Sonnett said. The section intends to bring the measure back to the House at the 2018 ABA Midyear Meeting.

Not surprising in this year of the travel ban, the House also passed several resolutions involving immigration. It voted to urge Congress to allow state courts to permit immigrants seeking legal status to be licensed to practice law, and to support “the principle that bar admission should not be denied based solely on immigration status.”

Thomas Kim, the 2017-2018 chair of the ABA Law Student Division, spoke in favor of Resolution 108. He said that his family had legally entered the country from South Korea 12 years ago, but through the actions of an unscrupulous lawyer his relatives had relied on, they were no longer in compliance with immigration laws. It was this experience that fueled his desire to become a lawyer and help families like his, he told the delegates. He urged them to pass the resolution and secure his future.

Jack Long of the State Bar of Georgia praised Kim for his intelligence and said many law students in his situation would also make fine lawyers, but he opposed the resolution.

“I would love to call them brother and sister lawyers,” Long said. But he expressed that by supporting the resolution, the ABA would not be upholding the rule of law.

There were votes opposing the resolution, but it was passed by the House of Delegates in a voice vote.

Resolution 10C urges U.S. Immigration and Customs Enforcement and U.S. Customs and Border Protection to treat courthouses as sensitive locations and to only conduct such arrests there “upon a showing of exigent circumstances and with prior approval of a designated supervisory official.” The measure urges Congress to codify into law guidelines like those issued in a 2011 memo by the ICE director that discusses sensitive locations.

And Resolution 115 calls for counsel to be appointed for an indigent person in deportation proceedings at the federal government’s expense. State, local and tribal governments should pay if the federal system does not.

In other House action: 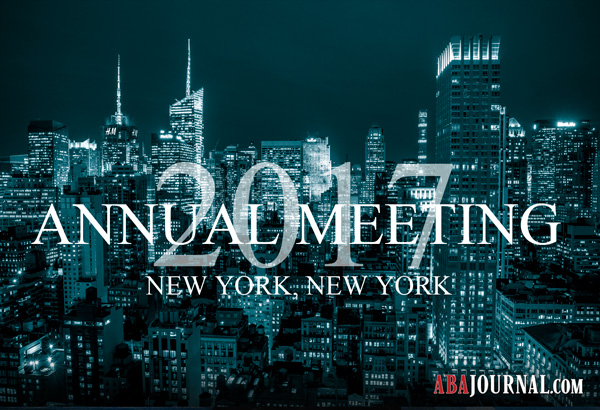 New York City has several monikers–the Big Apple, the city that never sleeps–but in August, it was home to the ABA Annual Meeting. Take a look back at some of the people, sights and presentations that helped shape this year’s event.