How I Spent My ABA Day in Washington 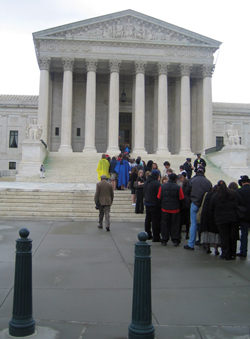 When I was a law student a dozen years ago, I had an experience that would forever change my life. For a whole semester as an intern in the office of John McCain, one of the senators representing my home state of Arizona, I freely roamed the halls of the U.S. Capitol, taking in its history at every turn of the marble pathways.

By day I went on mail runs, worked the copier, researched issues and chased staffers around to take in the excitement of the Hill. By night, din­ners often were made up of the numerous samplings of hors d’oeuvres at the ubiquitous Senate and House receptions.

I saw the legislative pro­cess from the inside with fresh, young eyes, and every day I observed people from all over the world who came to Washington to advocate for their causes.

When I revisited the Capitol in April, I remembered the pact I had made with myself when I was an intern—that someday I would return as a lawyer to help make a difference. The opportunity to once more pound the marble halls of Congress came in the form of ABA Day in Washington, the association’s annual lobbying effort on Capitol Hill, which is coordinated by the Governmental Affairs Office. This was the sixth time I’ve participated in ABA Day, which actually is a 72-hour marathon as bar leaders—there were some 300 of us this year—attend as many briefings and meet as many legislators and staffers as possible in support of the ABA’s legislative priorities in Con­gress. (See “Rite of Spring,” May 2009.)

3:01 p.m.: I’m in D.C. and ready to get down to business. Attend a CLE program on the art of advocacy on Capitol Hill.

5:20 p.m.: Meet a friend for quick catch-up at the world-famous Dub­liner, an Irish pub and restaurant within view of the Capitol. End up chatting with group representing the Michigan Snowmobile Association while watching clouds roll across the D.C. sky.

6:45 p.m.: We are met with a rainstorm as we walk to the Jones Day law firm—halfway between the Cap­itol and Union Station—for the congressional awards dinner.

9:48 p.m.: Bump into Rep. John Shadegg, whose district is near Phoenix, on the way from dinner.

11:31 p.m.: Bedtime after a post-dinner informal get-together with other members of the ABA’s Young Lawyers Division. 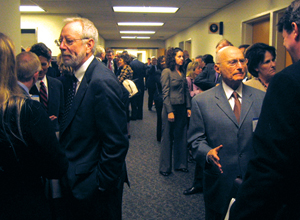 At the Library of Congress. Photo by C. Bradley Vynalek

7:36 a.m.: ABA President Tommy Wells reminds us of the importance of why we are in D.C. As volunteers, we are the “eyes and voices of the advocacy program,” he says.

7:50 a.m.: Assembled with the Arizona delegation, and the briefing begins: Congress receives 1 million e-mails a day, 15,000 visitors a week; it’s the first day after the spring recess, and things are going to be crazy on the Hill today. Ten thousand bills are introduced during a two-year session of Congress. Only 4 percent pass, and of those a third relate to naming post offices or federal buildings. We will have around seven minutes on average to give our pitch during our meetings with the representatives and senators. Brevity is key. Be on message and stick to critical points.

9:19 a.m.: OK, been sitting for a while. Should have skipped the bacon and eggs … feeling sleepy. Focus, focus. New cup of joe, and up and re-energized.

9:43 a.m.: Depart for Hill and coordinate speaking roles with other members of my delegation for our first meeting, with Rep. Gabrielle Giffords from southeast Arizona.

10:27 a.m.: After seeing the young interns in Giffords’ office, I am embarrassed that I have the audacity to call myself a “young” lawyer. I feel old.

10:35 a.m.: Refocus thoughts on the mission. Meet with Rep. Gif­fords’ legislative director—and success! Giffords likes and supports all of the ABA priorities. The LD even suggests that the representative may be willing to spearhead a new piece of legislation for the ABA!

11:15 a.m.: While waiting for a meeting with staff members in Sen. McCain’s office, I bump into my internship coordinator from years ago. She still remembers me and offers to mock me with funny stories from when I was young. Another staffer provides insight to the delegation about what is happening on the Hill now that the new administration is transitioned in.

Noonish: Quick lunch at the ABA’s headquarters on the Hill, set up at the Reserve Officers Association across Constitution Ave­nue from the Capitol. Brief fatigue kicks in, along with the first realization that I should have prepped for this trip with a strong cardio regimen.

1:20 p.m.: Back at Senate building. Arrive early for a meeting with a staff member for Arizona Sen. Jon Kyl, a member of the Senate Judiciary Com­mittee. The staffer immediately welcomes us, and we are virtually done with the meeting before it was supposed to start. Though the staf­fer cannot commit to support the ABA priorities, he promises to follow up with the senator.

2:05 p.m.: Holy smokes, my feet are hurting. Been back and forth between the Senate and House office buildings several times. Craving Gatorade and a PowerBar.

3:34 p.m.: Found a Starbucks about a block from Capitol Hill so I can take a break and check work e-mail messages. Kudos to them for the ever-present Wi-Fi network. Check voice mail and return client calls during big break between meetings and reception.

6:05 p.m.: The entire building has been evacuated due to gas leak in a loading dock of the James Madison Memorial Building, where the reception is supposed to be held. So the room setup is delayed, and we share our stories of the day’s meetings in a narrow hall while reception staff scramble to make up lost time.

7:30 p.m.: Depart reception and head to quick dinner at Old Ebbitt Grill near the White House. 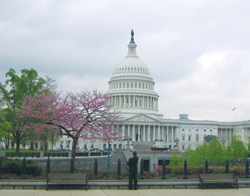 7:55 a.m.: Arrive at newly opened Capitol Visitor Center and meet up with delegation to compare notes.

8:35 a.m.: Ushered into the Con­gression­al Auditorium for breakfast briefing. All are relaxed and excited that this program didn’t start until 8:30. One savvy member of Arizona delegation switched out dress shoes for running shoes, which, frankly, adds an athletic and youthful touch to the suit and bolo tie.

8:43 a.m.: White House counsel Greg Craig makes us all feel very much welcome to D.C. when he remarks that it is “good to be at home with my brothers and sisters of the bar.” He says stepping into the new role of White House counsel is like “standing in the middle of I-95 with cars coming from both directions.” He believes that being a litigator, and being comfortable with confrontation and constant­ly preparing for alternatives, is the key to success. “Prepare, anticipate and be ready for anything,” he says.

9:03 a.m.: Sen. Tom Harkin of Iowa is met by a standing ovation recognizing all his work for access to justice for the poor. He explains that Congress has been met with the perfect storm: cuts for legal services have been drastic and needs have sharply increased. He promises to fight for increased funding for the Legal Services Corp.

9:33 a.m.: Head to Department of Homeland Security where I’ll have a quick lunch and take a tour.

1:30 p.m.: Catch a cab back across town and arrive for last Hill meeting half an hour early. The office of Rep. Jeff Flake, another Phoenix-area legislator, is filled with constituents and staffers. No place to sit.

2:05 p.m.: Meeting starts with staf­fer in the representative’s lobby. She apologizes and explains that the congressman is stuck on the House floor for three consecutive votes and that we are unlikely to meet him.

2:36 p.m.: Rep. Flake dashes in and thanks us for our work and thoughts. He asks for an extremely brief update on ABA priorities, then dashes back out to finish up voting.

5:04 p.m.: Meet up with NBC White House correspondent Savan­nah Guthrie, a friend from back home, who shares insights on D.C. and the news of the day. Perhaps the best thing about ABA Day is that it provides an opportunity to discuss issues in person with members of Congress. Face-to-face is how change really happens. And for me, Capitol Hill is still as exciting as it was a dozen years ago when I went there as an intern.

C. Bradley Vynalek is a partner at Quarles & Brady in Phoenix. He represents the State Bar of Arizona in the ABA House of Delegates.

Previous:
(Too) Easy For You To Say