How to appear confident and self-assured, even when you're not 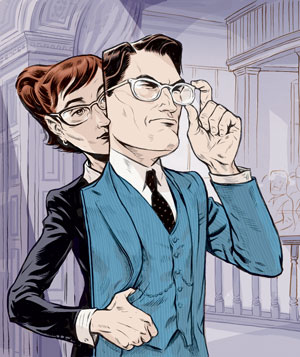 In other words: Who is your role model? And how do you measure up?

Every generation of lawyers has its own challenges. When I started practicing, way back in the last century, there were very few female lawyers, meaning that my role models were mostly male. And of course, we all need role models—at work, in court, among our colleagues—because we are always playing a role.

Today, there are many more and more diverse role models for young lawyers. Yet the older male persona is still what people think of when they think “lawyer.”

We all want to be the kind of lawyer whom our clients trust, our colleagues admire and judges respect. Usually, it takes time to build trust, admiration and respect.

THE ALLURE OF AGE

Vancouver, Canada, lawyer Jeremy Hessing-Lewis, who is now a consultant for law firms as well as a practicing lawyer, has a unique perspective on what clients look for when hiring a lawyer. “Whether justified or not, people want to hire the 60-year-old, gray-haired male lawyer,” he says. He notes that because the law is complex, its practitioners require intelligence, hard work and experience. “Experience takes time to acquire. Although age is not proof of a capable lawyer, it certainly is a good proxy for experience.”

So how can you adapt the traits of the trusted counselor to your own personality and style? This is a continuous and necessary process, because we are all changing ourselves over time.

Early in my career, I realized that the most successful young lawyers in the firm carried themselves with assurance and replied to all questions as if they knew the answer. Most of the time, their responses were adequate. Occasionally, they were completely wrong. But they were so self-assured, the error had no lasting negative ramifications for their careers at the firm.

I am not suggesting that you pull answers to important legal questions out of thin air. But you can, with the right tone, imply that you have it all under control. For example, as I learned to do, you can say something along these lines: “Although I think I know the answer to that question, I want to check the latest law on it, and I’ll be able to find the definitive answer for you by this afternoon.” You may not remember, but that was the kind of answer that played well on the essay portion of the bar exam. It demonstrates a general familiarity with the law as well as the ability to find out what more there is to know. It also shows that you know where to look.

The way you carry yourself can also convey experience, even when you have none. Stand straight. Keep your head up. Pull yourself up to your full height (in my case, this wasn’t very much; but it made me feel tall). When you speak, don’t mumble. Speak loudly and clearly.

In other words, fake age and experience until you actually get there.

However, don’t go too far into the zone of overconfidence. You wouldn’t want to backslap the managing partner. Or act familiar with the judge. Show your client the best you.

And try to figure out how to mimic age and experience based on your real personality. For me, this meant being “the reasonable woman.” I am measured in my tone, seemingly always willing to see every side to a question.

This article originally appeared in the December 2015 issue of the ABA Journal with this headline: “Playing the Part: How to appear confident and self-assured, even when you’re not.”