'I need to advise them to fall behind on their payments, and that's ludicrous to me.' 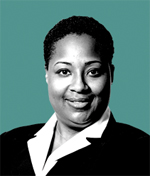 Arnettia S. Wright is a lifelong Washing­tonian, but she doesn’t work on Capitol Hill, and she wasn’t getting the information she needed about the October bailout bill from her office in the Chevy Chase neighborhood.

So when the bill was being kicked around in Congress, she chatted up people at Pennsylvania Avenue haunts like the Hawk ’n’ Dove, a bar popular with Hill staffers.

Lenders, they told her, were sitting on loans and not particularly inclined to work with borrowers, despite what they said publicly. Their motive was to wait and see whether the government would buy bad loans.

That jibed with what Wright was seeing in her solo practice advising real estate and small business clients.

“When you go to the bank with an underperforming loan looking for modification,” Wright says, “they take so long to make a decision about what kind of terms they want to offer the consumer.”

She also had a personal interest at stake.

“As a business owner, how do I position myself as someone who can get some revenues from this bill?” Wright asks. “It’s really just figuring out where the money will be funneled to.”

She’s still searching for that answer—and wondering whether there’s money to be made in doing volume loan modifications. Her real estate work has slowed, private businesses have fewer contracts, and franchisee clients are cutting back on building sites.

And for business clients who do have legal work, she’s charging them less.

“I’m not going to bill for everything the way I did at one point,” Wright says. For instance, a phone call might take 20 minutes, but Wright only charges the client for 12—and she makes the savings clear on the bill.

Commercial real estate work, she says, is down too.

“My clients don’t have the same pressure to make immediate changes that would require me to take an active, hands-on role in providing services,” Wright explains. “At the present time my role is purely ad­visory—and consequently goes against my bottom line.”

She’s also working with residential homeowners facing foreclosure or adjustable-rate mortgage payments they can barely afford, and she doesn’t charge. She’s been getting those clients since this summer, mostly through her nanny.

Although Wright doesn’t speak Spanish, that’s the only language for many of these clients. She refers them to a nonprofit agency that offers foreclosure-prevention classes in Spanish, but some—mostly those still current on their mortgage—come back, and Wright welcomes them. She also does wills and estate work, and she figures that when times get better, they might become paying clients.

“One of the primary things I see surfacing right now is the trust factor,” she says. “I was able to help one per­son, and they told all their friends about me. It’s really a communi­ty that goes by word of mouth, and everyone trusts you even if they haven’t met you.”

Out of the people who are current on their mortgage, Wright says, most want legal help before they fall behind. But even before the bailout bill, Wright saw that lenders often don’t want to cut deals until the borrowers are in default. If you have extra money you might be able to negotiate, she says, but that’s unlikely for someone struggling to meet his or her house note.

“The reality is that I need to advise them to fall behind on their payments,” Wright says, “and that’s ludicrous to me.”

Mortgage problems for some residential homeowners, she says, seemed to increase last summer. “A lot of the people I help are in service industries and construction. Because of the nature of the whole real estate market, they aren’t working as much.”

For institutional clients, the focus shifted earlier in 2008. “At one point clients would say, ‘This is what I want to do. Make it happen,’ with no real regard about financial constraints,” Wright says. That rarely if ever happens now. Considering all this, Wright is thankful for the extra court-appointed panel work she’s picked up on guard­ianship, conservatory and child abuse cases. Work involving guardianship and probate pays $80 an hour, and the child abuse cases pay $65. Her private-practice rate is $225 an hour.

“You can see it’s a significant difference,” Wright says, “but the beauty of the court work is it’s guar­anteed.”

And she hits Capitol Hill haunts monthly, often with other lawyers she’s met through the D.C. Minority Attorney Networking Series. The group was founded in 2005 by lawyers at Arnold & Porter and Fried, Frank, Harris, Shriver & Jacobson.

“Conservative, liberal … I chat up people on both sides of the aisle,” Wright says. “I need information, and I can’t always get the information sitting behind a desk—not for someone like me.”