Invasion of the House Snatchers: Some See Foreclosures as Key to Rent-Free Living 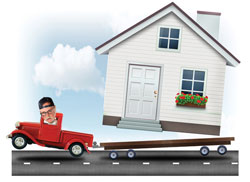 There are few feelings as rewarding as owning one’s own home. Sure, it can turn into a pit into which you pour seemingly endless amounts of money, but goshdarnit, it’s yours and if you keep up the payments no one can take it from you—right?

The age-old practice of squatting has long been recognized as a legitimate legal concept, within certain boundaries, of course. And with the nation awash in foreclosed homes, it was only a matter of time before the something-for-nothing mindset took hold and vacant properties went up for grabs.

Laws that by and large were intended to assist farmers and ranchers in gaining ownership of vacant land they had tended for several years have in many cases been co-opted by opportunists who see foreclosed residences as a veritable showroom of model homes—just pick one and move in. Under the principle known as adverse possession, a nonowner can enter a vacant or abandoned property, maintain it, pay the taxes, live there for a statutorily prescribed period—from five to 20 years, depending on the state—and take legal ownership.

But just because a residence appears to be foreclosed or abandoned, it ain’t necessarily so. Sometimes a broken-down boiler and other problems render a house unfit to live in while necessary repairs are done, as was the case with one owned by Heidi Peterson in Detroit.

Peterson bought the house in the Boston-Edison Historic District in May 2010 and leased it to some tenants. In February 2011 the boiler became inoperable and the tenants were evicted so that extensive renovations could be done.

During the time the house was vacant, one of the former tenants—Missionary-Tracey Elaine Blair—filed papers with the city to have the property declared abandoned, according to Fox 2 News. Blair, who claimed to be a write-in candidate for U.S. president, moved in, changed the locks, replaced some appliances, had some repairs done and then put a construction lien on the property for $8,500, the amount she said she spent.

This past October, Peterson returned to the house, intending to move in with her young daughter, only to find that Blair had taken up permanent residence and wasn’t about to vacate the premises.

This being a civil matter, the police were pretty much powerless to intervene, so Peterson—with no money to take her daughter elsewhere—resigned herself to the fact that, reminiscent of The Odd Couple, she would have Blair as a roommate until a housing court could go through the lengthy eviction process and make a final determination on who would stay and who would go.

But a few days later, Blair appeared to have had a divine revelation and moved out of the home, telling a Fox reporter: “She thought that I was going to take her property, but I wouldn’t do that because I wouldn’t be blessed by God. I wouldn’t have good luck if I take this property knowing that she has an interest in it.” The almighty, indeed, works in mysterious ways.

As we—as a nation—make our way back to fiscal fitness, it is with the hope that fewer foreclosures will translate to fewer instances of entitlement gone wild.