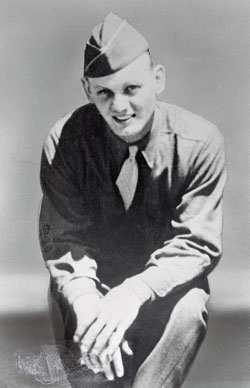 The last day of January 1945 was bitterly cold in the Vosges Mountains. A blinding storm had blanketed eastern France, and now the snow crunched beneath a 12-man squad of combat soldiers filing into position to shoot one of their own. Pvt. Eddie D. Slovik had been tried for desertion by a general court-martial two months earlier. Convicted in a proceeding that lasted barely 100 minutes, he was dishonorably discharged, stripped of his $60 per month paycheck and sentenced “to be shot to death with musketry.”

Slovik, the son of Polish-Americans, was from a suburb of Detroit. Biographer William Bradford Huie described him as a compliant bumbler classified as unfit for the draft when he emerged from reform school. While others went to war, Slovik got a job, married and had settled in for his first taste of a decent life when he was reclassified and drafted in 1944. Embittered, Slovik spent much of his short Army career trying to get out. When his first artillery barrage convinced him he was unfit for combat, Slovik pleaded to serve behind the lines. Rebuffed, he vowed to desert and did so. He eventually turned himself in, expecting to be imprisoned for the duration of the war.

Slovik had reason. No soldier since the Civil War had been shot solely for cowardice, and no one—including the three officers who sentenced him—expected Slovik to be executed. Of 10.1 million World War II inductees, an estimated 40,000 were believed to have deserted before under similar circumstances. Of 2,864 general courts-martial for desertion, only 49 resulted in death sentences approved by a convening authority. But Gen. Dwight D. Eisenhower, anticipating heavy casualties in an important upcoming offensive, decided Slovik could not be spared.

When the shots were fired, all but the traditional blank found a mark on Slovik’s upper body. Though it took him a full 15 minutes to die, Slovik had faced death bravely, by all accounts. Slovik told the attending priest that he hadn’t been afraid to die; he’d feared the randomness of death in battle: “I guess that’s what I couldn’t take—that uncertainty.”