John Adams Gets His Day: The First Lawyer-President Set a Standard for Representing Unpopular Causes 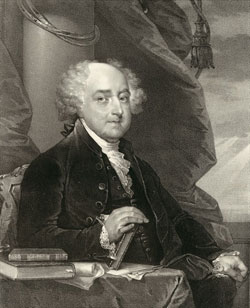 Adams defended British soldier’s actions in the Boston Massacre. Photo courtesy of the Library of Congress.

What would John Adams do? that simple question is at the heart of the ABA’s Law Day theme for 2011. Building a theme around an individual is something of a departure for the celebration of the U.S. justice system that has been held every May 1 since 1958. The only other “hero” of Law Day was Abraham Lincoln in 2009, which marked the bicentennial of his birth.

But the life and accomplishments of Adams—the nation’s second president and the first lawyer to hold that office—resonate with issues that are high on the nation’s agenda today, including the importance of ensuring due process in the justice system and the value of civic education.

“Without civics, we don’t understand what American democracy is and why we have it,” says ABA President Stephen N. Zack, who is administrative partner at Boies, Schiller & Flexner in Miami. “And without that understanding, our government and entire way of life are at risk. The founding fathers lived with risk to our democracy every day. This year’s Law Day theme reminds us of their bravery and vision in establishing American rule of law, and reminds us today that we must protect what they began.”

The theme, “The Legacy of John Adams: From Boston to Guantanamo,” has roots that go back even further than his involvement in the events that shaped the new nation.

THE STREETS OF BOSTON

When British soldiers fired into a crowd of protesters on March 5, 1770, in what became known as the Boston Massacre, Adams stepped up to defend them. He did so despite his status as a prominent leader in the colonial resistance to British rule because he also believed in the rule of law. In the seventh of his “Novanglus” letters, a series of newspaper essays published anonymously during 1775, Adams described the importance of “a government of laws, and not of men.”

Adams’ defense of the eight soldiers, contending that they acted in self-defense against an unruly mob, resulted in the acquittals of six and manslaughter convictions for the other two. An entry from Adams’ diary three years later refers to his defense work as “one of the best pieces of service I ever rendered my country. Judgment of death against those soldiers would have been as foul a stain upon this country as the executions of the Quakers or witches.”

Those sentiments still echo today whenever attorneys take on unpopular causes, including those who have represented detainees at Guantanamo Bay accused of terrorist acts.

“We thought this was a good theme to raise within the organized bar, and of course within the educational system,” says Kim J. Askew, the ABA’s Law Day chair. “Adams believed in due process,” says Askew, a partner at K&L Gates in Dallas. “That entire concept of defending the unpopular client was an important aspect we wanted to highlight. John Adams represented the British when people said he should not. It’s the perfect example of a lawyer taking on an unpopular cause.”

In addition to developing a Law Day theme, the ABA produces a guide on how others can host programs during what has evolved into a weeklong event. The ABA was to kick off its activities April 25 at the National Press Club by honoring teachers for achievements in civic education.

Involvement by lawyers is a key to the success of their local Law Day events. “The most important thing,” Zack says, “is to do something in your community that serves the public and reminds all Americans of the value of our rule of law.”