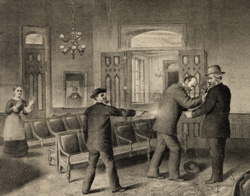 Photo of Illustration by Charles J. Guiteau/©1881 Library of Congress

One day after James Garfield’s presidential inauguration, Charles Guiteau traveled to Washington, D.C. Guiteau had haltingly given a half-baked campaign speech in support of Garfield, and somehow fancied it crucial to his election. He expected to be rewarded with a consulship, though the self-described “lawyer, theologian and politician” had no experience in foreign affairs—and had shown no capacity for any sustained endeavor.

Guiteau aggressively pressed his claim, but his letters were consigned to the “eccentric file.” Not long after he was told he hadn’t the faintest chance of landing a diplomatic post, Guiteau claimed he was seized by a divine mandate: Garfield had to be “removed,” and he was to carry out the task. Guiteau bought a gun and tracked the president’s every move. On July 2, as Garfield prepared to board a train, Guiteau approached him from behind and fired twice. Garfield died 79 days later—not due to the bullet wounds but to the botched medical care he received.

During the ensuing trial, Guiteau interrupted witnesses, berated his own counsel, and even signed autographs and appealed for financial support. His antics alone hinted he was “off his nut,” but the prosecution argued his only affliction was that of “moral depravity.” Finding Guiteau capable of discerning right and wrong, the jury rejected the “insanity dodge” and convicted him as indicted. Before he was hanged on June 30, 1882, he read a poem he’d written for the occasion, a line of which read: “I saved my party and my land, glory hallelujah!”