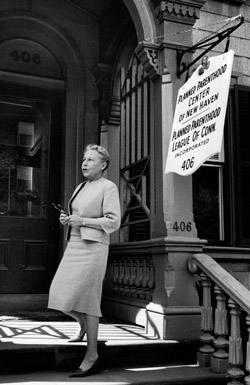 The Planned Parenthood League of Connecticut prepared a set of test cases in the late 1950s challenging an 1879 statute, crafted by circus impresario P.T. Barnum, that made it a crime to use or counsel anyone in the use of any form of contraception. After the Supreme Court mooted three cases contesting the statute in June 1961, citing a lack of enforcement, the PPLC responded by opening a birth control clinic for married women in New Haven.

The league’s executive director, Estelle Griswold (above), and the clinic’s medical director, Dr. C. Lee Buxton, were soon arrested for violating the 1879 law and eventually convicted and fined $100 each. In a 7-2 ruling four years later, the high court overturned their convictions and struck down the statute.

In his majority opinion, Justice William O. Douglas argued that a right to privacy, though not explicitly addressed in the Constitution, was inherent in the marital relationship and implicitly provided for in the guarantees of the Bill of Rights. In dissent, Justice Potter Stewart conceded that the law was “uncommonly silly,” but held it was an issue for the legislative branch, not the courts, to decide.