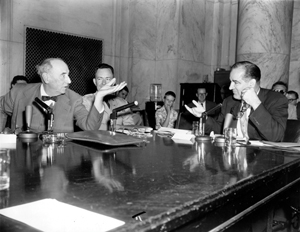 As chair of the Committee on Government Operations, Wisconsin Sen. Joseph McCarthy cast a wide net in his manic quest to root out subversive elements in government. By the fall of 1953, he was investigating vague and varied evidence that the U.S. Army was “coddling Communists,” a charge Secretary of Defense Charles Wilson dismissed as “damn tommyrot.”

On March 11, 1954, the Army fired back, alleging that McCarthy and his chief counsel, Roy Cohn, had sought an Army commission and other favors for David Schine, a recent draftee and close friend of Cohn’s. In hearings that followed in April, McCarthy fared poorly before live TV cameras. For weeks, he was seen badgering witnesses and brandishing doctored documents, often appearing inebriated.

When he impugned Boston lawyer Fred Fisher, a colleague of Army counsel Joseph Welch’s, Welch (at left) disdained: “Have you no sense of decency, sir, at long last? Have you left no sense of decency?” Welch walked out, leaving a bewildered McCarthy to ask, “What did I do?”Badly damaged personally and politically, McCarthy was censured by the Senate, 67-22, on Dec. 2, 1954.