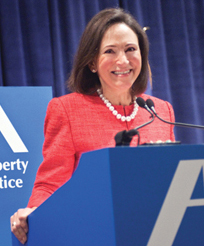 Carolyn Lamm assumed the presidency of the ABA at the 2009 Annual Meeting in Chicago, telling the House of Dele­gates that “the term rule of law may sound like an abstraction, but history is full of evidence that reminds us otherwise.”

Drawing on historical references as diverse as Anne Frank; her father, who stormed the beaches of Normandy on D-Day; and Martin Luther King Jr., Lamm said: “We know there are still young [women] in hiding, still young men landing on beaches, and still people who sit in dark rooms waiting for doors to open.

“As imperfect as our nation was, we struggled toward justice. And it is not just the rule of law but the rule of just law” for which we strive, she said.

An international trade and litigation lawyer from the Washington, D.C., office of White & Case, Lamm made a reference to the ABA’s motto of “Defending Liberty, Pursuing Justice.”

“Defending and pursuing are not inactive verbs,” Lamm noted. “We must constantly upgrade our programs, processes and relationships with our members.”

She said her year in office will include five initiatives:

• Help lawyers weather the tough economy. She’ll appoint a com­mission to help lawyers displaced and members of the public harmed by the economy.

• Study the regulation of lawyers. The Commission on Ethics 20/20 will consider how lawyer regulation should change in response to globalization.

• Increase the ABA’s advocacy for the pro­fession and public.

• Boost diversity and make the legal pro­fession better reflect the society it serves.

• Draw more lawyers into the ABA so the organization will be in a better position to advocate for the profession. Lamm said propos­als to change ABA dues pricing will be presented to the House of Dele­gates in Febru­ary.

As she closed her speech to the House, Lamm once more invoked her father, whose commitment to justice was hardened on the battlefields of Europe. “I am my father’s daughter,” she said. “Although our battles are different, our determination is not.”