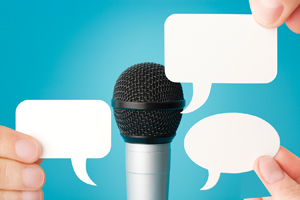 In 2009, Law School Transparency got attention in the legal world by bringing statistics to bear on a growing problem: unemployment and high debt for recent law school graduates. Six years later, LST's co-founder and executive director, Kyle McEntee, says schools and regulators have made major improvements.

But "getting more statistics was never the endgame for us," says McEntee. LST is moving beyond stats with its new podcast, I Am the Law, which invites potential law students to think not only about the value of a legal education but also about what they might end up doing with it.

"We think if we can show what lawyers do, people will eventually make better decisions about joining the profession and then choosing which jobs actually make sense for them down the road," McEntee says.

Each episode of I Am the Law focuses on a different type of law job, so far including immigration, public defenders, administrative appeals and more. Guests take listeners through a typical day and answer questions about their work. Though most episodes discuss traditional jobs, McEntee says a few will focus on "JD-advantage" jobs, such as one about an e-discovery manager at a large firm.

McEntee sees this podcast as different from other online information on legal careers. While others offer career advice, I Am the Law is actively avoiding giving advice. As far as he knows, the podcast is the only one tracking "a day in the life" for any kind of professional.

And McEntee believes the podcast format is important because it's both more personal and more convenient than the typical in-person career event. It also plays to Law School Transparency's success with the Internet.

"We would not have been able to have a voice and have influence if we weren't part of the Internet, which democratizes good arguments," McEntee says. "I see this as capitalizing on advantages that we had early on."

This article originally appeared in the May 2015 issue of the ABA Journal with this headline: "Prelaw Advising: Law School Transparency offers podcasts focusing on different legal jobs."