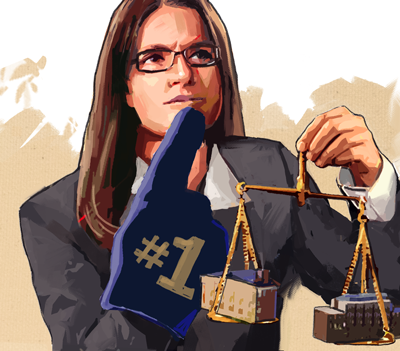 Even before Samantha Licata attended any classes at Brooklyn Law School, she was thinking about ways to transfer out. Thanks to online law student forums and a Barbri Law Preview course, she knew that good grades could make her goal doable.

So as a 1L in 2015, she read as many class outlines as she could find and used the information to make her own outlines, even skipping Thanksgiving with her family to examine more fact-pattern hypotheticals.

The hard work paid off. After her first year wrapped up with straight A’s, she’s now a second-year student at the University of Pennsylvania Law School.

Although the number of student transfers has been decreasing, law schools are interested in taking transfer students to bring in more revenue, according to higher-education consultants. It’s become a seller’s market for first-year students at the top of their class: They easily can move to a higher- ranked school or stay put and get bigger tuition discounts.

There are a few incentives to keep or attract 1Ls with good grades—people who do well their first year generally pass bar exams on their first attempt, and transfer students traditionally pay full tuition. Nothing in the ABA Standards and Rules of Procedure for Approval of Law Schools speaks specifically to financial aid packages that law schools offer as an inducement to transfer or existing students, says Barry Currier, managing director of the ABA Section of Legal Education and Admissions to the Bar.

The number of law students who transferred between 2015 and 2016 has actually decreased, says Jerome Organ, a professor at the University of St. Thomas School of Law in Minneapolis who wrote about the development in a post on the Legal Whiteboard blog. His numbers show a steady decline since 2013, which occurred during the same time law school admissions declined.

It’s hard to know how many law schools are offering deals to students to stay put, he acknowledges, because that information is not specifically reported in the Standard 509 Information Reports.

“It is possible that with increases in the size and number of scholarships available to incoming students, the cost differential for transferring has grown and made it less attractive,” Organ says. “It is possible that some schools are being more generous in offering scholarships to retain potential transfer students. We just don’t know because this information is not collected and published.”

Some deans complain that transfers hurt their bar passage rates. But it’s not likely that the council of the legal education section would create accreditation rules that restrict transfers because that could stand in the way of student opportunities, says Organ, whose work focuses on transparency in financial aspects of the decision to attend law school.

In terms of ABA accreditation standards and transfer regulation, schools must disclose transfers in the 509 reports, and there are some rules about accepting credits from other schools.

Organ says it’s possible that the legal ed section might add reporting requirements for a law school’s graduating class or collect more information about how transfer students’  bar passage rates compare to those of graduates who started as 1Ls.

“That is an area about which we know very little,” Organ says. “Even though my guess is that those transferring to another school assume that they are likely to see comparable bar passage and employment outcomes as those reported for the graduating class as a whole. ... That may or may not be an accurate assumption.”

Licata has a summer associate position lined up at a large law firm. She didn’t participate in on-campus interviews at either school but made recruiter connections at various networking events hosted by LGBT student groups.

“They can look at us and know that we worked really hard that first year. If they see that we transferred in, it means that we were at the top of our class,” she says.

Traditionally, first-year law students interested in transferring would reach out to schools on their own. Now, when law schools deny admission or wait-list an applicant, they increasingly tell them to check back in after first-year grades, sometimes keeping up the communications throughout the applicant’s first year, says David Mulligan, CEO of Eduvantis, a Chicago company that focuses on higher-education marketing and strategies for enrollment.

George Washington University Law School indicated that it had 106 transfer students in its 2016 509 report. Fifty-one of those students came from American University Washington College of Law.

“We need to dig deeper to find out why students feel the need to move. For us, this is a moment of self-reflection,” says Camille Nelson, who became American University’s law school dean in July 2016, shortly after the students transferred.

Annual, full-time tuition at GW Law is $56,244, according to its 509 report for 2016. Of its 2015 graduates, 64.7 percent had full-time, long-term JD-required jobs, according to the school’s employment summary information.

American University’s employment summary information shows that 44.2 percent of its 2015 graduates had full-time, long-term positions practicing law. The school’s tuition is lower than GW Law’s, with annual, full-time tuition at $53,016, according to its 509 report for 2016.

Regarding whether American University offers tuition discounts to students who have transfer opportunities, Nelson says financial awards are available for high-performing first-year students.

“When students come to speak to us [about transferring], we really try to counsel them about their options. If one option includes greater monetary support, that’s part of the conversation,” she says.

‘worth it to try’

Schools that try to keep potential first-year transfers frequently warn the students that their GPAs start fresh at new schools, and that getting on law review will require participation in write-on competitions.

Students such as Licata say potential employers only care about applicants’ first-year grades, and transferring to a higher-ranked school benefits them more than being guaranteed a law review spot.

Michael Matta, who started law school at George Washington in 2015, transferred last fall to the UCLA School of Law with a GPA that he thinks was in the top 35 percent of his class and an LSAT score of 165.

Matta previously was wait-listed by the California school. Following the advice of another law student who transferred from GW to UCLA, last spring Matta asked the dean of admissions for a campus tour, and they met in person during the visit.

“You want to plant a little seed in terms of your name,” Matta says.

A California resident, he now pays in-state tuition, which is $45,338, according to the school’s 509 report for 2016. According to its employment data, 73.7 percent of its 2015 graduates have full-time, long-term JD-required jobs.

Transferring to a higher-ranked law school, Matta says, is easier than one might think.

“Even if it doesn’t end up panning out, it’s still totally worth it to try. It’s not really a huge time-suck,” he says. “A lot of people would really kick themselves in the butt if they knew they could do it and didn’t.”

This article originally appeared in the June 2017 issue of the ABA Journal with the headline "Leap Year: 1Ls at the top of their class are in the catbird seat as law schools look to poach talent."