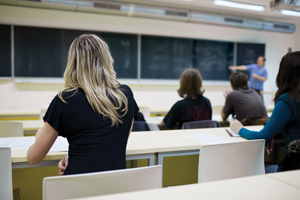 Currently, schools don’t have to count as having failed a student who withdraws before dismissal. Shutterstock.com

Law schools would be required to provide more detailed information about attrition rates for admitted students under a proposed change in the reporting requirements being sought by an ABA committee.

Law schools are now required to disclose on their annual information reports the overall number and percentage of admitted students from each class in the previous academic year who flunked out, transferred to another school or left for nonacademic reasons.

Under a draft resolution adopted in February by the Standards Review Committee of the Section of Legal Education and Admissions to the Bar, law schools would be required to base those numbers on the admitted students' LSAT scores and undergraduate grade point averages.

In March the resolution came before the section's governing council, which referred the matter to the Data Policy and Collection Committee. The committee, which reviews and recommends changes in the annual questionnaire that law schools must complete, was tentatively set to take up the matter in April.

If that committee decides to recommend any changes in the questionnaire, they would presumably go before the section's governing council at its June meeting in Minneapolis.

In its resolution, the Standards Review Committee says more detailed attrition data is necessary to promote greater transparency and provide greater consumer protection for law school applicants. It would also assist the Accreditation Committee and the section's council in assessing whether a school is operating in compliance with the accreditation standards.

Committee member Peter A. Joy, who drafted the measure, says that while attrition data is currently reported accurately, it can be misleading—particularly to an applicant with weak academic credentials, who may not realize that the academic attrition rate for similarly situated students may be much higher than the school's overall rate.

"The way attrition is now reported is not fully informing the applicant and distorts reality," says Joy, a professor and director of the criminal justice clinic at Washington University School of Law in St. Louis.

Moreover, the questionnaire now instructs schools not to count as having flunked out a student who withdraws before dismissal, Joy says, raising the possibility that a school might counsel a failing student to drop out in order to reduce the attrition rate it reports.

The draft resolution was unanimously approved by the committee. It specifically requests that the council direct the Data Policy and Collection Committee to require law schools to provide the kind of detailed attrition data it is recommending and to consider whether schools should also be instructed to change the way they account for failing students who drop out before being dismissed.

At its February meeting, the Standards Review Committee also heard from a variety of invited speakers on two matters the council had asked it to take up. One is a provision in the standards requiring law schools to "demonstrate by concrete action a commitment to diversity and inclusion" in student admissions, faculty and staff, that refers specifically to "gender, race and ethnicity," but which several groups, including the ABA Commission on Disability Rights, want to expand to include disability, sexual orientation and gender identity.

The other is a provision in the standards prohibiting a law school from granting academic credit to a student for taking part in a field placement program for which the student is compensated.

The Law Student Division supports lifting the ban so debt-saddled students will have more opportunities for paid work. But others, including the Clinical Legal Education Association, contend the ban is necessary to ensure that the educational purposes of the placement remain paramount. Currently, schools don't have to count as having failed a student who withdraws before dismissal.

This article originally appeared in the May 2015 issue of the ABA Journal with this headline: "Deeper Data: Law schools would have to break down attrition info if proposed changes get green light."