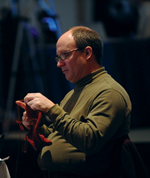 Mark Johnson of Johnson & Lechman-Su in Portland, Ore., has his own way of enduring long ABA House of Delegates meetings. He knits.

“I took it up in law school,” explains Johnson, the Oregon state delegate. “It’s a great stress reliever. It’s hard to sit still, so during meetings I knit sweaters.”

Johnson allowed that he’s probably the only man who knits his way through House meetings, but he has compatriots among the ABA’s 555-member policymaking body.

“Several women in the House are also knitters,” he says. “We have a little klatch.”