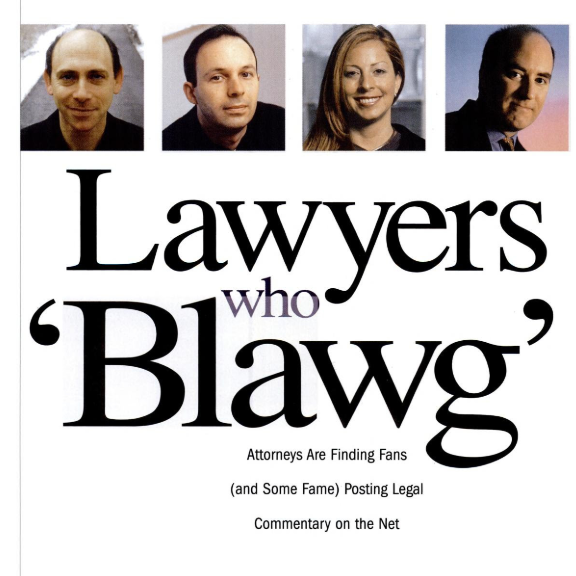 “I’ve started getting fan mail now,” says Martin Schwimmer, publisher of the Web log called the Trademark Blog. It’s safe to say that I got virtually no fan letters when I was just a trademark lawyer.”

Schwimmer is one of a few savvy legal professionals who have found that by self-publishing logs on the Internet, they can attract a wide audience hungry for information about even some of the more obscure legal topics.

Web logs, or blogs for short, are simple Web pages where anyone can collect links to interesting articles and publish personal commentary. Blogs, sometimes spelled “blawgs” in a legal context, have become a popular way for lawyers to keep up with legal news and trends. Think of bloggers as people who surf the Web so you don’t have to, collecting the most interesting and newsworthy information in one place, complete with explanatory text.

Web logs like Schwimmer’s site or Howard Bashman’s How Appealing are proving that even arcane areas of the law are endlessly fertile ground for commentary and can have a broad appeal. After journalists, in fact, lawyers and law professors publish some of the best-known Web logs. Instapundit by Glenn Reynolds, a University of Tennessee law professor, is one of the most popular blogs on the planet. However, his is more of a general interest publication, and this article profiles only practicing lawyers and law professionals who blog about legal issues (yes, “blog” has al­ready entered the vernacular as a verb).

Why have lawyers taken to blogging? “To me it may not be entirely practical, but lawyers are a gregarious people,” says Eugene Volokh, a UCLA law professor who writes the Volokh Conspiracy. “A lot of them don’t have an outlet for their interests. Blawgs give them that.”

One of the first questions many regu­lar read­­ers of Howard Bashman’s blawg have is how he manages to keep up with his job as head of the appellate division for Buchanan Ingersoll in Phila­delphia while creating one of the best Web sites about appellate law. “Fortunately, I don’t need much sleep,” he says, “and as long as I can maintain my ob­li­ga­tions to the firm, they let me do it.” He says it actually helps that he has a young child at home, which explains why many of his posts appear in the wee hours of the morning.

Bashman estimates he gets 3,000-5,000 hits a day from all over the globe. Those are strong numbers considering the site is narrowly focused on appellate law. “Howard’s and a few other blogs, most of which didn’t even exist six months ago, have risen above the hundreds of voices self-publishing out there,” says Rick Klau, author of the ABA book The Lawyer’s Guide to Marketing on the Internet. “A guy like that who is authoritative and readable can get noticed.”

Perhaps the biggest testament to the influence of How Appealing is that a mention of an obscure footnote on the site turned into a minor media event. In October, Bash­man mentioned that a 5th U.S. Circuit Court of Appeals footnote mistakenly took the 3rd Circuit to task for a decision on regulation of sexually oriented busi­nesses. Ac­tually, the decision was by another federal appeals court. The next day, 5th Circuit Judge Jerry Smith amended the decision to account for the mistake. Wired.com picked up on the story, and pretty soon the news was all over the Net as an example of the power of blogging. For his part, Bashman insists, “The whole thing was blown out of proportion. The reaction blew me away because it was a minor mention.” Even though his blawg has gotten Bashman mentioned in The New York Times and numerous other publications, he maintains that his project is done for love of the subject matter. “This is not a marketing concept. This is not something to do to attract business immediately,” Bash­man says. “If I wanted to drum up business, there are better things I could spend my time on. World domination is not the goal.”
Tom Goldstein Blog name: SCOTUS Blog Internet address: www.goldsteinhowe.com/blog Goldstein and howe is one of the younger, small­er firms in Washington, D.C., specializing in U.S. Supreme Court cases, but you probably would not know it just visiting the firm’s Web site. That’s because—with a staff of just three lawyers, two externs and two law clerks—this little firm has managed to publish one of the most comprehensive supreme court resources on the Net.

Tom Goldstein, one of the founders of the firm and the impetus behind the blawg, says the SCOTUS project began less as a labor of love and more as a way for Goldstein and Howe to make its name. “We use blogging for very different reasons than Howard Bashman,” he says. “For us it’s very much a business development tool.” SCOTUS Blog manages to publish court-related links and missives every business day. “It really requires us to focus because if we take a day off, people stop coming,” Goldstein says. “Of course, sometimes the real problem is that the court is asleep. This summer is going to be a real chore when the justices are gone for three months.” Unlike most blogs, this one does not editorialize or speculate much beyond handicapping which cases the court might hear next term. “I think we have found our voice,” says Goldstein. “Most blogs are opinionated by nature, but we’ve decided to be an objective voice.”

Running what is essentially a journalistic enterprise might seem like a distraction to most lawyers, but Goldstein says it has actually made everybody at the firm sharper, forcing them to know everything going on at the court. Of course, the ultimate goal is to win clients, thanks to the site. “I do expect that we’ll eventually start to get cases from the blog.”

For denise howell, an ap­pellate and intellectu­­al property lawyer for Reed Smith Crosby Heaf­ey in Los Angeles, blogging is not just an outlet but also a chance to be right at the inter­sec­tion of the Internet and the law.

“The Web is like a big bomb that’s been dropped into the middle of settled legal issues,” she says. “It’s a fertile legal playground for lawyers.” Like other well-known legal bloggers, Howell seems to have the kind of active mind that can effectively combine literary, legal and technological aspirations into one neat package. She began her academ­ic career at UCLA studying English, earning departmental honors for a thesis on T.S. Eliot’s works. Then she took what she de­scribes as a “South Campus turn,” spend­ing more of her time in the science- and computer-related part of the school. In 1990 she earned a law degree from the Uni­versity of California, Berkeley, but she never stopped sponging up computer information. Howell says blogging helps her keep up with legal technology issues, especially intellectual property law. It also has brought her into contact with all sorts of like-minded people. This community ranges from influential lawyers to first-year students. “I’ve been having dialogues with people all over the world I never would have come into contact with otherwise,” she says.

Howell has been a lawyer for 13 years and was one of the first legal bloggers, launching Bag and Baggage on Nov. 28, 2001. She says the blawg has been a positive influence on her personal development. “One thing I didn’t expect when I started my little page was that I would become a news maven,” she says. “There’s something to be said for being incredibly well-informed when it comes to the law, and blogging definitely does that.” She keeps in close contact with other bloggers, always keeping an eye on the evo­lution of the medium. Now Howell is considering the possibility of incorporating Bag and Baggage into her firm’s Web presence. “I’m convinced blogging offers enormous bang for the buck,” she says. “For the time investment and financial investment, it couldn’t be a better deal.” Martin Schwimmer Blog name: Trademark Blog Internet address: http://trademark.blog.us/blog

Like a lot of other people in the year 2000, Martin Schwimmer got caught up in Internet fever, leaving his job as partner with a trademark and copy­right firm in New York City to become gen­eral counsel for a startup. And like a lot of people that year, Schwimmer quickly found himself un­employed, leaving that job after only 12 weeks.

But rather than jump back into a large-firm environment, Schwimmer landed an unexpected offer to represent Amazon.com in a trademark dispute and decided to give solo practice a try. “I thought, ‘That came pretty easy. I might as well see how long this lasts,’ ” he says.

So far, Schwimmer says the hardest part about working alone is trying to stay plugged in to the legal community. But thanks to his Trade­mark Blog, Schwimmer has not only stayed plugged in. He also has become one of the top trademark authorities on the Web. In fact, if you search for the word “trademark” on the Google search engine, Schwimmer’s blog is one of the top 10 sites listed, right below sites like the U.S. Patent and Trademark Office home page.

Like most blogs, Schwimmer’s site is a hodgepodge of his musings and commentary on all aspects of his field of interest. The thing that’s surprised Schwimmer the most is that his site appeals to a wide audience. “I thought this would appeal mostly to maybe 40 international trademark lawyers,” he says. “But it’s not turned out that way at all; it’s very much a general audience. There’s a huge interest in trademark and property rights issues on the Web.”

Thanks in part to the site, Schwimmer has a successful trademark prac­tice representing clients such as General Electric. But even though his growing practice makes it harder to keep blogging, he says it’s some­thing he could never give up now. “If I were in a practice, this probably wouldn’t be something I could do myself,” he says. “But I think it’s so powerful that I’d probably have to hire someone else do it.”