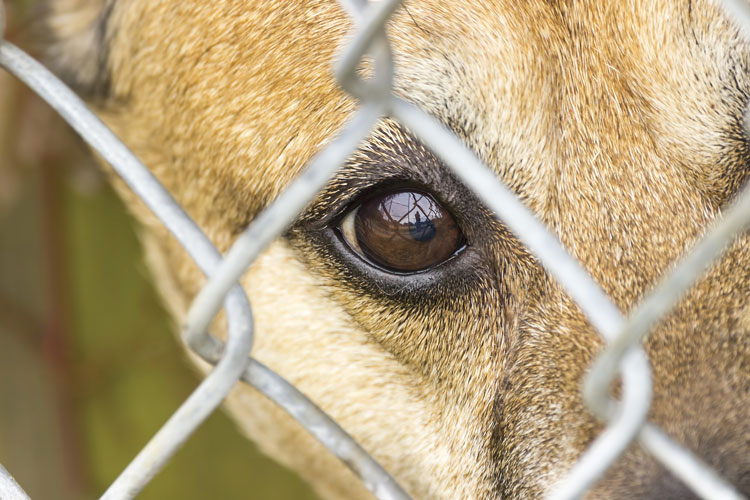 On Feb. 1, 2014, a Maryland police officer investigating a robbery shot and killed a family’s beloved dog.

Officer Rodney Price, who’d been on the force for a year, was in the waterfront neighborhood of the Baltimore suburb of Glen Burnie searching for witnesses. Price encountered Vern, the Reeves family’s 4-year-old Chesapeake Bay retriever, in the yard after knocking on the front door. He shot Vern twice after the dog went at him, he claimed.

Timothy Reeves, one of the family’s adult children, and his father, Michael, were in the basement hanging a dart board. They hadn’t heard Price knocking or the gunshots. Reeves’ then-girlfriend saw Price in the yard and told Reeves he had better come upstairs.

Reeves ran out to find Vern “bleeding out and gasping,” he says. Michael followed his son outside. When he saw Vern, he put his fingers into the bullet wounds, trying to stop the bleeding. Vern died a short time later.

According to the Baltimore Sun, Price said at the time that Vern had “confronted and attacked” him, provoking the shooting. “I unloaded on your dog. Your dog attacked me, and I killed it,” Price reportedly told the family.

The Reeves family filed suit against Anne Arundel County and Price. More than three years later, in May 2017, a jury awarded Michael Reeves, Vern’s primary owner, $1.26 million, the largest civil judgment in U.S. history for a pet’s death at the hands of police.

However, the court later reduced the judgment to $207,500 under a Maryland statute that limits local governments’ liability. “This is still one of the highest awards ever for the shooting of a family pet by police,” says Cary Hansel, a Baltimore lawyer who represented the Reeves family.

Hansel, animal advocates and the family say they hope the judgment sends a message and leads to changes that will protect more pets. “No one ever needs to experience what we did,” Timothy Reeves says.

According to the American Pet Products Association, nearly 90 million dogs are now living in homes in the United States, and the number is rising every year. That raises the likelihood of police encountering dogs on the job.

No one knows exactly how many pets are killed by law enforcement officers every year because there is no uniform reporting or collection of data on animal killings. The most widely cited estimate from the U.S. Department of Justice is that every day, police officers kill 25 to 30 dogs—or some 10,000 per year.

Pets are considered property under the law in nearly every respect, which creates challenges in determining their value in civil litigation. By and large, when a pet is killed—by police or civilians—the damages are limited to the animal’s economic value, though some states also allow for emotional damages, either by statute or common law.

Across the country, there have been some substantial, high-profile awards in cases in which judges found constitutional violations against owners.

It began in California in 2005, when the 9th U.S. Circuit Court of Appeals at San Francisco held that San Jose police officers committed an unconstitutional seizure in violation of the Fourth Amendment by killing three dogs during raids on a Hells Angels clubhouse and several members’ homes.

The city paid a $797,500 settlement, according to Randall Lockwood, a senior vice president for the American Society for the Prevention of Cruelty to Animals.

“This is part of a trend of recognizing that pets are beloved and valuable members of the family whose emotional value is indeed inestimable,” Lockwood says.

There have been a handful of high settlements and judgments since. Among them, in 2016, the city of Detroit entered into a $100,000 settlement after an officer killed a dog chained up next to a home.

Last year, the city of Hartford, Connecticut, settled for $885,000 with a family whose dog was shot and killed during what the 2nd Circuit at New York City deemed to be an unlawful search. A Colorado family received a $262,500 settlement in 2016 for the death of their dog at the hands of a police officer.

“Pet Threat,” April, misidentified Chelsea Rider as an attorney. She does hold a JD.


This article was published in the April 2018 issue of the ABA Journal with the title "Pet Threat: Courts are awarding significant damages to families whose dogs are killed by police."