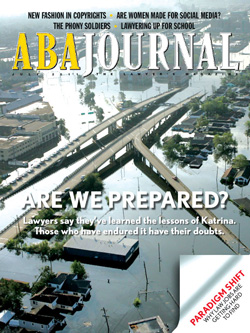 Regarding “Paradigm Shift,” July, consider this: 1. “The biggest problem,” says Fred Ury, “is that ordinary citizens cannot afford to hire a lawyer.” 2. There are a heck of a lot of attorneys out there looking for a job. 3. The obvious answer: hanging a shingle and offering prices that (a) the attorney can survive on and (b) a majority of people can afford.

Of the attorneys looking for a job, many have toyed with the idea of hanging a shingle. The problem? The wasteland that exists between the lowest amount an attorney can afford to charge after including overhead and the price that 90 percent of the population can afford to pay.

But ask yourselves: What would it take to ensure that young lawyers are able to go straight from law school to their own practice?

“A self-taught lawyer with only one year of frontier schooling, Abraham Lincoln rode his horse into Springfield in 1837 with all his belongings in two saddlebags,” Lincoln Home brochure. He became a very successful attorney and we know the rest.

I think there are a lot of young attorneys who would give their right arm for the opportunity to ride into town on a scooter with all their belongings bungee-corded to the back, and a chance to help people and show that they are as good an attorney as the state bar proclaims. But who can afford to? And with all the industry regulations and constant threat of harsh punishments hanging over their heads, who is crazy enough to want to?

I’m afraid the solo branch of the legal profession is headed the way of the dinosaurs—at the expense of 90 percent of the population, and a young attorney’s dream.

I graduated in 2006, when times were still good, and went through a more traditional hiring path when the reality hit hard. Now I am doing solo/small-firm work with an LLM and focusing on small businesses and individuals.

Law schools are part of the issue here. To be brutal, we have far too many—the surge in the number of schools, many of them attorney factories (and quality appears to suffer a little), is not helping. I think the ABA needs to work toward whittling down the number of law schools, especially of the for-profit, unaffiliated variety. Demand has clearly declined, and oversupplying is the wrong approach.

I was just talking to a 2L. I told her to try to find the practice area that interests her the most this year and treat her third year like an apprenticeship so she’ll be better prepared to hang out her shingle rather than vie for a big-firm job. I think everyone has to abandon the idea of hundreds of lawyers working for one firm and get used to 100 solos each with their own specialty.

HISTORIANS SIDE WITH PIRATES

Thank you for “The Genuine Article,” July, on the proposed copyright protection for fashion. One aspect of this debate often ignored is any sense of historical context. Sumptuary laws regulating dress date back to ancient Greek, Roman and Confucian societies and were later instituted in medieval and colonial American societies during periods of great social change and uncertainty, as we are experiencing today.

Like the Innovative Design Protection and Piracy Prevention Act, these outdated laws tended to promote economic protectionism (fear of domestic and global competitors, especially China), increase government control over social identity (largely protecting the elitism of major fashion designers and their well-heeled clientele), and imbue a murky social issue with official notions of morality (is it evil piracy or good industry trendsetting?).

These laws usually ended up increasing, not decreasing, public demand for and piracy of forbidden clothing. Sumptuary laws failed because of a lack of public support and compliance as well as infrequent and half-hearted enforcement. Similar to earlier laws, the proposed act will ultimately be viewed as archaic, ineffective government meddling that will be virtually unenforceable in our market-driven, individualistic society. Although the article states that only “pirates and preachers” are still opposed to the proposed law—perhaps historians should be added to that list, too.