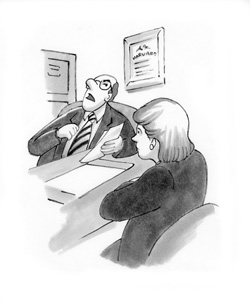 “Your credentials are impeccable, Ms. Schmidt, but it is against firm policy to hire anyone who has attended a law school they can actually afford.” Illustration by Tom Gianni.

In 34 years of practice, I have never experienced a client or prospective client asking where I went to law school. In addition, if you look at the resumés of top lawyers who represent people, as opposed to corporations, you will not find the so-called top law schools heavily represented.

Professor William D. Henderson and Rachel M. Zahorsky’s “The Pedigree Problem,” July, is required reading for anyone interested in the practice of law. Large firms have no interest in hiring from “second-tier” schools. It is in fact more likely vanity, or fear of making a poor hiring choice, similar to the old adage that “nobody was ever fired for buying IBM.”

The quality of legal education has improved significantly due primarily to the efforts of the ABA accreditation process. I can personally vouch for the very high quality of my alma mater (Ohio Northern University). We undergo the same training, pass the same bar exams and appear in the same courts as our Ivy League brothers and sisters. Employers that hire from only the top tier are leaving the cream of the crop to others who are not so shortsighted.

I’ve practiced all over the Pacific Northwest and Mountain West. I love it when lawyers from the East Coast or LA or Dallas show up in my cases. They often make sure to let everyone know that they went to Harvard or Boalt Hall or Georgetown. Their pedigree seems to lead them to be arrogant, condescending, unfamiliar with local precedent, foreign to jurors and far less effective than they believe themselves to be.

Whatever benefit I derive from their arrogance and ineffectiveness, it is not good for our jurisprudence

that the entire U.S. Supreme Court and so many federal appellate judges are drawn from such a small cultural and intellectual pool.

I went to a law school that now (or so my email tells me) is in the top 100. I had excellent professors who taught me to think, write and act like a lawyer

while I was there, and I assume it has a similar quality of instructors there now. What it doesn’t have—and what I miss the most about my law school education—is the former chief justice of the Oklahoma Supreme Court, Marian Opala, who passed in October 2010. I was his TA, and he taught me more about legal history and procedure than any other class in law school.

The quality of your education should be measured by your professors and not the gravitas of your institution. But unfortunately, the reality is often otherwise.

I found the second cartoon particularly amusing for its subtle misstatement of reality. While it presumes to depict a hiring attorney who graduated from Harvard Law School, his diploma is clearly a fake: HLS diplomas do not say “Harvard” anywhere on them because they are written entirely in Latin.

Last year I was opposing a lawyer who had taken his master’s at Berkeley and went to law school at Virginia. He was a true intellectual and a gentleman. I went to a fourth-tier public school in the upper Midwest and had no luck finding work with law firms, which is why I am solo. He probably has a better life than me. I don’t know if he wins more cases, but he sure earns more money and I would bet he has a more interesting caseload. The big issue here might be just what the article is talking about. I believe in the “good in, good out” principle too and can see how building a firm might make good use of it. I don’t like to hire anybody I don’t know. This is an advantage when accountability is at issue, and school ties—especially elite school ties—are as good a replacement for personal relationships as you can get.

I’m not defending snobbery; I just appreciate the technical difficulties of building organizations. Considering that the method and design of my legal education came from the same place as everybody else’s, I have something to be happy about every day I serve my clients as their lawyer.

As the GC for a small but successful regional business and the consumer of outside legal services, what’s particularly interesting/telling about the entire debate is that it presumes the ultimate goal of a law school graduate is to work for a big corporate law firm.

My perception of private business is that it is decreasingly interested in paying corporate law firm rates, and that more legal business is being moved in-house. My experience with a large, high-prestige local firm was a stark reminder that it’s in my company’s best interest to avoid the “big law school experience” and enormous fees by seeking more entrepreneurial, less expensive outside legal help.