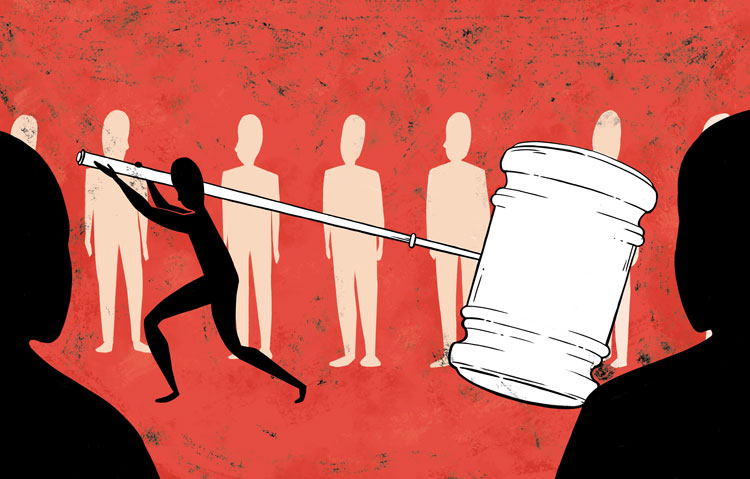 Thank you for a great article, “Workers Wronged,” November. I have represented plaintiffs in employment discrimination cases for 32 years. It has become more and more difficult to get a fair chance at trial due to the anti-employee bias of many federal judges, including the evermore difficult standards required to get past summary judgment. We take only the strongest cases (e.g., employees with long histories of excellent performance who are suddenly mistreated after a new supervisor arrives on the scene, with evidence that the new supervisor is harder on women or black employees). Nevertheless, we struggle to stay in business.


Social change through law is messy. But it also aggregates over time. Attitudes toward sexual harassment, for instance, have changed dramatically since Anita Hill. Thirty years of women standing up one by one is why public attitudes recently reached the critical mass that brought down Harvey Weinstein and opened the door to a flood of revelations.

The cases are contentious because the system requires that incendiary allegations be made. To make a case, an employee must accuse an employer of anti-social behavior (invidious discrimination or harassment), and to defend a case the employer must accuse the employee of misconduct or incompetence. Other advanced industrial nations simply require a showing of just cause for termination of employment and have a less onerous standard for recognizing constructive discharge. So many of the cases are, at their core, about basic fairness and equity. But employees must squeeze their claims into the discrimination mold to hope for a fair result, which is why many cases are not successful.

While it might sound nice in theory for Hawaii to become a sovereign country again (“To Form a Nation,” November), do the people of Hawaii really want to lose all of the rights they now enjoy as Americans?

One need look no further than another Pacific island whose people once enjoyed rights as Americans: the Philippines. Prior to 1946, Filipinos were U.S. nationals. (U.S. nationals are almost the same as U.S. citizens: They carry the same U.S. passports as citizens; can freely travel to, live in and work anywhere in the country; are completely immune from deportation or visa requirements; and can apply for full U.S. citizenship after living anywhere in the country for three months.)

By getting independence, Filipinos subjected themselves to the full wrath of U.S. immigration law (something that is becoming more and more onerous by the day). Today, it can take almost two decades for some Filipinos to immigrate to the U.S. There are massive lines to get visas at the U.S. Embassy in Manila, and it is increasingly difficult to get any work visas for Filipinos.

Do the Hawaiians really want to subject themselves to the same fate?