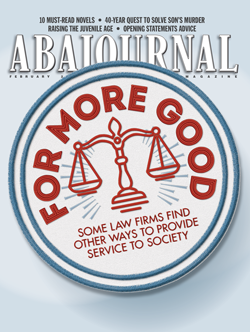 While the main point of “Caught on Tape: Is slow-motion video biasing jurors?” (February) is good and helpful, my thanks go out to the law prof from Northwestern University who commented on the study, Robert C. Owen. He twice noted the importance of replicating the study.

As John Oliver said in his excellent piece about scientific studies, “there is no reward for being the second person to discover something. ... There’s no Nobel Prize for fact-checking.” There ought to be. And hats off to Owen for including it in his comments.

I can’t be sure without seeing the full study, but it seems to me that the conclusion doesn’t necessarily follow from the facts.

In other words, it could be that the slow-motion video led to more convictions and harsher sentences because it distorted the jurors’ impressions of the timeline, or it could be merely because it did what it was supposed to do by making the action easier to follow and the details easier to distinguish.

Regarding “Foot Fight” (February): There is another side to the evanescent remedy result. I was a member of a class action to recover damages from misuse of mortgage escrow funds. I learned about it in a notice of the certification of the class. The remedy? A $1 credit to my escrow account in exchange for full release of all rights. I could discern no mishandling of the account and surmised that the suit was an attempt to “cleanse” the mortgagee from future claims in order to sell the loans.

I suggested the case be dismissed, as it accomplished nothing positive for the class and only a negative waiver of rights for illusory gain, and the class attorneys be awarded nothing. The Subway case is different; but the whole class action scenario needs serious work to ensure genuine cases can be brought and cases in the “so what” category, like I view the Subway case, can be easily dismissed.