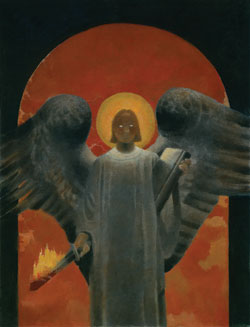 As a college friend of Judy Clarke and her husband, “Speedy” Rice, I am not surprised that she became a star in whatever she felt called to do. Her ability to connect with and find the humanity in criminals the rest of us view as monsters reflects her upbringing and the best of the little Christian college in South Carolina we attended. Judy stands as an inspiration for underpaid, overworked and often maligned public defenders everywhere.

I get advocating against the death penalty, but Clarke lost me claiming Susan Smith’s hopelessness is not malice—that the hopelessness killed the children. No, she may have had hopelessness (like all humans on earth have encountered), but the decision to kill them was malice.

Psychobabble is this era’s defining characteristic. Philosophers and historians may look back on our time with amazement. It has penetrated the American psyche and overcome common sense and decency so that the worst acts are now presumed prima facie evidence that the person could not have acted intentionally. No horror could be malicious; there must be an underlying psychobabble explanation that highjacked the ability to act deliberately. It’s a false religion that equates deliberate, premeditated destruction of another life as “depression, hopelessness” or outside one’s control. It’s a cult that has invaded society on all levels. Shameful that lawyers have been at the forefront of this fraud. 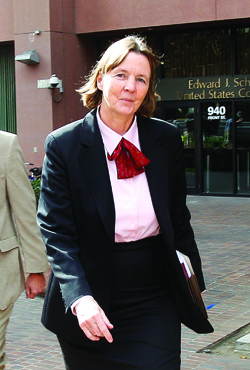 Now, ladies and gentlemen of the jury, let’s look at each and every person who was killed, maimed, injured, lost limbs at the hands of the Boston Bomber. We will examine step by step the lives of each of those victims—who they were, who they are, their families; and let’s just see what a despicable, intentional, callous act of making a bomb, placing the bomb and the effects of a bomb that sent its contents searing into the body parts of so many and ruining their lives forever.

Let’s examine the life and times of the Boston Bomber, starting in his homeland of Russia—his inhumane growing up at the hands of family members … (are you shedding a tear yet?).

The point of the above is despite Clarke’s wisdom at advocacy and what she does, sometimes there must be a “life for a life” to set straight—or at least bring back into some sort of understandable alignment—the insanity of violence and violent acts that take the lives of innocent men, women and, particularly, children and that have gripped our nation in recent decades. For this commentator, a life in prison for the Boston Bomber does not do justice for those who suffered at his hand.

As a long-ago president of the San Diego County Bar Association, I can tell you that we’ve long been proud of Judy Clarke. After joining the bar in the late 1970s, she soon became widely known for her high-quality representation of a wide variety of clients. What you see is what you get: class and competence—35 years of it. Way to go, Judy!

Clarke does her job, she does it well and she’s a credit to herself and her profession. God bless her if not her clients.

Regarding “The 7th Annual Blawg 100,” December: You overlooked a great one: Legal History Blog.

You definitely should have Tort Talk, published by Dan Cummins, on the list of nominees because of his comprehensive analysis of cases of interest as well as “scorecards” on topics as various judges write opinions in cases throughout Pennsylvania. Can’t recommend Tort Talk highly enough!

Evan Brown’s Internetcases.com is one of the more useful blogs I have encountered. How did this escape your scrutiny?

Regarding “Parsing Infinity,” December, David Foster Wallace’s advice on arguing persuasively: Author Bryan Garner and I met at one of his writing seminars in San Diego a few years ago, and at a pleasant lunch we discussed Wallace’s writing. We both had tried to get through Infinite Jest and failed. Since, I have tried again—and failed.

While that volume may have its literary merit, for me it is unfortunately as a doorstop. I found it to have many of the flaws Wallace recited in his interview with Garner—foremost a lack of clarity. One has a great deal of trouble finishing something that weighs a couple pounds when one is constantly asking, “Where the hell is this going?”

Wallace is far from the only sinner. Publication of Mark Twain’s autobiography unmasked him as an author in desperate need of an editor. To my regret, I have filled my library with equally unreadable stuff, requiring endurance rather than pleasure to consume.

Wallace’s best or most accessible work was his nonfiction, which I have enjoyed. But, for me, Infinite Jest is a gift of a door that will never close.

Wallace was always very insightful about the use of a particular linguistic style, patois, as a signifier of one’s social status. He once wrote a great essay for Harper’s magazine on this subject. Reading this interview, I was waiting for him to mention George Orwell as a model of clarity, and I was glad that he finally did. Orwell’s essays are an unfailing antidote not only to our semantically vacuous political discourse, but also to turgid academic or legal writing, especially of the postmodern variety. I read “Politics and the English Language,” an incredibly liberating essay, at least once a year. Everyone should.

It is very sad that Wallace committed suicide. Obviously, he was an extremely smart, humane, thoughtful dude who we could have used (not that his usefulness to anyone else created any obligation on his part to stay alive). I agree with those who say his essays were better than his fiction; though admittedly I have only tried Infinite Jest and stopped after 100 pages. The book had an excessively brainy quality, which also came through in his essays but fit them better. This quality was brilliant and funny. But I thought it also bespoke, subtly, a lack of confidence, notwithstanding his own knowledge of his unusual intelligence and writing ability. 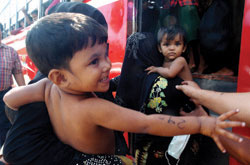 Children are carried onto a bus this past January after being rescued from alleged human traffickers during two separate raids near Thailand’s southern border. AP Photo/Sumeth Panpetch

THE REALITY OF HUMAN TRAFFICKING

Steven Seidenberg’s upbeat article on the Uniform Act on Prevention of and Remedies for Human Trafficking (“A Law with Bite,” December) contributes to the illusion that the campaign against human trafficking is going well and just needs uniform laws among the states and a few tweaks.

The reality is, however, that state prosecutors are not waiting for this act. Research has found that they prefer to use laws already available. Also, sex victims pose serious problems of cooperation, while labor victims are never even seen. Patriotic declarations like “Slavery in the land of the free will not be tolerated” leave the mistaken impression that this campaign is achieving some sort of American ideal.