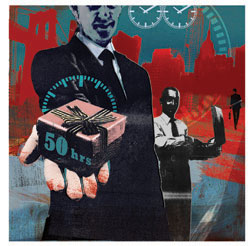 Regarding “Magic Number,” March, about New York’s new rule requiring bar applicants to perform 50 hours of pro bono work: This is a bad idea. Many students are already graduating with $150,000-plus debt. Why should they be saddled with additional requirements for entry to the bar?

What other professional organization has the gall to tell its members that they must work for free? Does the bar think that forcing new attorneys to work for free will somehow make them want to do more pro bono work? If this is such a good idea, then all attorneys in New York should be required to complete the pro bono work. Just see how far that proposal would get.

If they want to make representing the poor more feasible, then they should focus their efforts on making law school affordable.

As an attorney who has devoted a substantial portion of his time and financial resources to pro bono work over more than 30 years, I am deeply disappointed to see such a rule imposed. It is one thing to encourage attorneys to “do good.” It is totally wrong to impose it by law, as a surrogate morality tax, upon an already overburdened profession. Moreover, the idea of mandatory pro bono to solve a “crisis in access to justice” does a disservice to the community and the political process by applying a Band-Aid to cover a long-term, systemic problem.

I used to have respect for Bryan Garner, but no longer (“Why Lawyers Can’t Write,” March). Like all other human beings, attorneys must write to suit the task at hand. In addition to being a lawyer, I write novels and opinion pieces. There is a huge difference between the writing required to produce that kind of narrative and the writing required to draft a marital settlement agreement. Sheesh.

I suspect we are not permitted to curse like sailors in this forum, but: Bryan Garner, consider yourself cursed.

We are conditioned in law school to follow precedents and take no chances, and to me that’s the root cause of unintelligible lawyerspeak. (If hereinbefore worked for the senior partner who gave you the sample contract, it’s good enough for you, and there must be a very good reason it’s been used since 1823, even if you have no idea what that reason might be.) I have yet to see a contract (heretobefore) that’s not liberally peppered with provided thats and hereins. I’m convinced that most lawyers believe that the courts, by now, must surely have fixed in stone the meaning of herein, and that it is therefore a safe and preferred term.

It is a sad fact that very few associates have the confidence to use plain English and fear being called out if they don’t do things the “right” (i.e., the usual, hidebound) way. By the time they become partners, free to write as they please, that miserable writing style has become an ingrained habit, to be passed on to the next generation.

This is a good article, but, in discussing the merits of writing style, one draws a target around one’s own. Our role model, in giving us the goal of the best writing, becomes our competitor in the pursuit of that end. Accordingly, I have a suggestion or two. Mr. Garner cites his own work too often. It gives the appearance of narcissism, of being stuck on himself, “Absalom stuck in the trees” as it were. Some self-effacing humor could have alleviated this, but Mr. Garner seemed less willing to be self-effacing than to throw his own poo. Bit of a shame, that.

“But there’s plenty of blame that falls elsewhere.” This sentence is just awkward. I had to read it twice to make sure I understood his meaning. There is such a thing as delightful ambiguity, but there was none here.

“Please don’t view that statement as an offensive denigration but as a promising personal opportunity to rise.” This was, how shall I say? Pompous. “Sometimes … a brilliant legal writer will be asked to incorporate a sentence or two, unchanged, written by an inept one. It’s a bad feeling.” Here we have to assume that Mr. Garner was not discussing his most recent experience working with Justice Antonin Scalia. Now I’m a big fan of Justice Scalia’s, and I just wish Mr. Garner could have made this clearer than he did.

But, all in all, a good article.

My writing teacher in law school was an adjunct, and her full-time job was as a career clerk for a federal judge. She told us that she always found herself saying, “I’m sorry, your honor—if I had more time, it would be shorter.” My favorite professor (appellate writing and argument) drilled into me that editing is the time-consuming part of writing.

I learned quickly that they are right. Editing to create a succinct, readable and well-written document is the hard part. “Writing” is easy. I’ve taken 30-page briefs and gotten them down to 15 or 20—which shows how much unneeded information and prose wiggled into the original draft. The reason younger generations are struggling with writing well is that they aren’t taught to edit. Having worked with high school students, the hardest part was getting them to understand that draft No. 1 is not a finished product (well, that was after we taught them that “copy and paste” does not a draft make).

As a client often paying exorbitant fees to a legal professional, I expect—if not demand—clear, concise communication of a professional standard.

It is one thing to miss a small typo or incorrect preposition in an urgent, informal email; it is quite another to deliver a five-page memo that could have been three.

If anything, it is unclear, verbose, legalistic hyperbole that can end up adding man-hours and dollars to the final fee. How many times have I heard lawyers complain about the hours they have spent deciphering a counterparty’s prose—not because of the complexity of the law at issue, nor intentional obfuscation, but simply bad writing? Who ends up paying for that? Me, the client.

I agree with the concept that writing should be short, sweet and clear—in contracts and in litigation. But I beg to differ with the view that all archaic language should be discarded. Any good contract drafter understands that the two purposes for a contract are (1) to serve as a road map for the parties during performance and (2) to serve as evidence in litigation. That’s it. Let’s look at purpose No. 2. If I take a clause that has been validated by the courts for 50 years and substitute my own “clearer” language, and then there is litigation, do I have confidence that my desired interpretation will win in court? Should I be the vanguard for change? And if I lose in court, should I tell my client with pride that we took one for the plain English team?