Letters to the Editor: Income Tracks 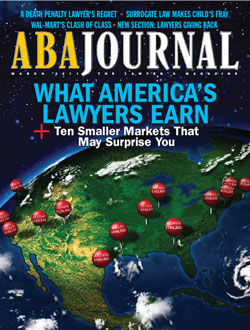 Our March cover story, “What America’s Lawyers Earn,” generated a lot of buzz. Check out fellow readers’ analysis and anecdotes—and our expert Bill Henderson’s comments and clarifications about the data—and tell us what you think.

Thank you for “A Life in the Balance,” March, on the death penalty saga of Abu-Ali Abdur’Rahman and his trial attorney, Lionel Barrett. While your article has the tone of a cautionary tale for lawyers not to bite off more than you can chew or charge less than the case merits, this case presents much more.

It is about a lawyer who agrees to represent a client facing the death penalty and then who does nothing to prepare the case for trial or to seek the court’s forbearance for a continuance. While Barrett gives no excuses and asks for no forgiveness, his behavior was outrageous. Even more outrageous have been the multiple judges who have failed to find in Abdur’Rahman’s favor in his post-trial litigation alleging ineffective assistance of counsel.

Your article is remiss in not including citations to those court cases—this is after all a journal for lawyers —but the cases are easy enough to look up. And they present a picture of judges with a mindset that would find a lawyer effective or his ineffectiveness not prejudicial in all cases perhaps but one where the client was represented by a blow-up balloon with a smiley face drawn on it. Shame on them and shame on Barrett.

There is a big difference between being found guilty and receiving a death sentence. There was apparently little or no mitigation investigation done. While I do not condone Barrett’s conduct, at the time the case was prosecuted, in many jurisdictions, courts and prosecutors pushed cases to trial with requests for continuances frowned upon.

Further, even capital cases were underfunded with little or nothing available for investigators or mitigation experts. Although funding issues for indigent death cases may have improved in recent years, it still remains an issue, leaving many attorneys appointed on these cases to be faced with personally financing needs or not pursuing areas where expense is not provided.

I find particularly troublesome the conduct of prosecuting attorneys seeking to win at all costs. When deliberate acts to conceal, withhold and misrepresent evidence are involved, the courts should grant retrial. In my experience there is too often a willingness in courts to excuse this conduct under the guise of “harmless error.” I have argued that such conduct undermines the system of justice, only to be advised that I should file a bar complaint against the offending prosecutor.

What Barrett should have done was withdraw as counsel; however, I’m not sure the trial court would have allowed him to do so with the trial date pending, nor that the appellate courts would have found any error in refusing to allow the withdrawal.