Letting It All Hang Out 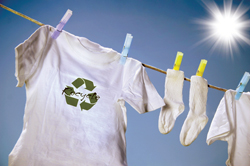 Alexander Lee is dedicating his professional life to airing out laundry. Clean laundry—not that other stuff.

Lee, who is a lawyer as well as founder and executive director of Project Laundry List, believes the simple act of air-drying laundry combined with cold-water washing can lead to a significant reduction in power consumption and help curb global warming.

But convincing others to follow his simple plan has been something of a challenge. Scores of community associations and even some municipalities have outlawed clotheslines. “People say, ‘I don’t want to see a big pair of underwear hanging out next door,’ ” says Lee, who had his landlord install a rotary clothesline in his Concord, N.H., backyard. “It’s really absurd. People have hung their clothes out for thousands of years. They can hang the panties inside a sheet.”

Lee hatched the plan for Project Laundry List while in college after he heard a speaker suggest that clotheslines could help shut down the nuclear power industry. Lee, who took up the right-to-dry cause full time in 2007, now funds his nonprofit from small donations and by selling clotheslines on the Web.

To date, Project Laundry List has worked with activists and legislators in Colorado, Hawaii, Maine and Vermont to pass right-to-dry laws. The group also advocates for change in community association bans against clotheslines, and it is behind an online petition to persuade the Obamas to hang-dry their clothes on the White House lawn as a one-day symbolic act.

While the clothesline on the White House lawn may not ever happen, Lee takes heart in a recent Pew Research Center study showing that the number of Americans who think of clothes dryers as a necessity has dropped to 66 percent, from 83 percent in 2006.