George Escareno will be the first to admit that his path to law school was an unlikely one.

As a first-generation American born to Mexican parents with scant more than grade-school educations, Escareno had few role models outside of his working-class Chicago neighborhood. But thanks to a chance conversation between his mother and a co-worker, Escareno was given what he calls one of the best gifts of his life—the opportunity to meet lawyers and other professionals through an internship at Cristo Rey, the Jesuit high school he attended in Chicago.

“It is because of Cristo Rey that we were offered a better opportunity to succeed,” says Escareno, now a first-year at John Marshall Law School in Chicago.

The college preparatory school’s mandatory corporate internship program was originally conceived as a way for its predominantly Latino student population to pay tuition. Students are required to work one day a week at paid jobs in corporate America arranged for by the school; the jobs are at businesses such as law firms, banks and hospitals.

But Cristo Rey administrators soon realized that the internship component of the school’s curriculum was more then just a way for students to defray tuition costs. “We found that there was an enormous educational opportunity with the program,” says Kristy Blackmore, who heads the school’s national network of work-study programs.

Not only are students exposed to different businesses and professions, but many like Escareno find mentors who guide them to careers they never thought were possible for themselves.

Escareno began interning at Gardner Carton & Douglas (which has since merged into Drinker Biddle & Reath) while attending Cristo Rey and continued to work there during college. Early on, he developed a mentoring relationship with partner Jesse Ruiz, one of the firm’s only Latinos at the time. “I always spoke to him when I was at the firm,” Escareno says. “His stories influenced me.”

Escareno questions whether he would be in law school now without Ruiz’s support and encouragement.

Stories like Escareno’s are now commonplace throughout Cristo Rey’s alumni and have helped propel the school—in just 12 years—from a little-known high school in a largely Latino community in Chicago to a national network of 22 schools.

Since its inception, Cristo Rey has found strong support within the legal profession for its students as well as its internship program. The national network now counts nearly 200 legal organizations—from international law firms like Mayer Brown to the Illinois attorney general’s office to the American Bar Association—offering opportunities to its students.

“Once you hear the premise, it is an easy thing to say yes to,” says Joe Torres, a partner in the Chicago office of Winston & Strawn and co-chair of the firm’s diversity committee. The firm has Cristo Rey interns in several of its offices.

Torres says that law firms benefit just as much as students from the internship program. While most firms put the students to work in clerical jobs, Torres says the kids still absorb what it means to be working in a professional setting. “They spend the day interacting with lawyers and paralegals. It allows them to appreciate what lawyers are doing.”

And the program helps firms put their money where their mouth is on the issue of diversity. “We are sowing the seeds for the future,” Torres says. “We are benefiting the firm and the legal community at large.”

For Ruiz, the opportunity to get more Hispanics into the profession through programs like Cristo Rey is personal. He is the only Hispanic partner in his office and doesn’t like the distinction. Every year he makes the point of telling Escareno’s story to the firm’s new Cristo Rey interns.

“They only see you sitting there as a partner in a major law firm, but you can let them know that, just like them, you might have gotten tripped up along the way. But now they have their opportunity and they should take it.” 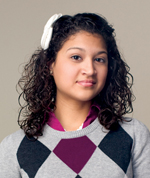 Vanessa Vera, 16, is a junior at Cristo Rey Jesuit High School in Chicago. This is her first byline.

What has been the best thing about Cristo Rey for you? I love being around students who encourage you to do well.

What has interning at Sidley Austin and the American Bar Association taught you? I have learned about all the different kinds of lawyers there are. I have met two lawyers here at the ABA who have answered a lot of questions and doubts I had about becoming a lawyer.

Do you have any desire to be a lawyer? Absolutely!