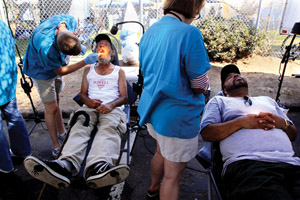 On any given night, there are some 107,000 homeless veterans on the streets of America’s cities and towns. Nearly all of them are men, but the number of homeless female veterans, and those with dependent children, is on the rise. Homeless veterans also experience high rates of post-traumatic stress disorder, traumatic brain injury and sexual trauma—conditions that can contribute to substance abuse and mental health problems. In addition, multiple and extended deployments often lead to unemployment and domestic conflicts.

On June 22, the U.S. Interagency Council on Homelessness released Opening Doors: Federal Strategic Plan to Prevent and End Homelessness (PDF) which outlines the Obama administration’s goal of ending homelessness in the United States within five years.

The report cites the ABA’s work in this area, including programs focusing on homelessness among veterans. Members of the Governmental Affairs Office and the ABA Commission on Homelessness and Poverty have participated in high-level meetings with the U.S. Department of Veterans Affairs and the interagency council to determine the most effective role for lawyers in addressing the issue. The ABA, along with state and local bars, is pursuing initiatives on multiple fronts.

Veterans treatment courts offer structured intervention, treatment and integrated services to help reduce recidivism among veterans who struggle with the effects of service-related injuries and disorders, mental health issues and substance abuse. The ABA House of Delegates adopted policy supporting these courts in February. At the VA’s urging, the policy also sets forth principles for setting up the courts.

“The commission’s leadership in developing a model for veterans treatment courts could not be more timely, given the unprecedented number of veterans returning home from war who suffer from PTSD and TBI,” says Paul Freese of Los Angeles, a special adviser on veterans advocacy for the commission.

The ABA, the VA and the U.S. Department of Health and Human Ser vices have created a new initiative for resolving child support issues facing homeless veterans and their families that is being tested at nine pilot sites.

In the pilots, veterans enrolled in the VA’s specialized homeless services also may participate in a new program, Supportive Services for Veterans Families. The ABA identifies local lawyers to serve on support teams with representatives of VA-funded housing providers and local child support offices.

The commission also provides support for Stand Down events, where homeless veterans receive a wide range of support services in one location, including legal assistance in dealing with outstanding criminal matters that are barriers to other services. In addition, the commission has helped create and enhance more than 50 homeless courts across the country.

“My experience working with homeless veterans is that they want to participate in our communities lawfully and fully, but given the challenges they face in service to our country, [they] have a difficult time adjusting to civilian life,” says Steven R. Binder, a San Diego public defender who is a special adviser on homeless courts for the commission.

“These veterans served to provide for our safety,” he says, “and it is our turn as a nation to assure their safety and well-being.”