Making a Play for Solos 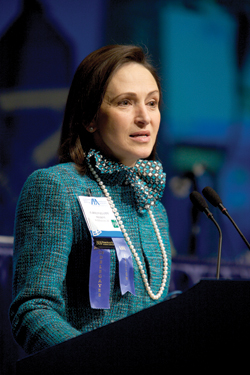 Patricia Lee Refo says it’s too early for membership statistics to reflect ABA efforts to serve lawyers in solo practice more effectively, but what she’s starting to hear anecdotally is music to her ears. A colleague recently told her he joined after learning the ABA was discounting dues for sole practitioners and introducing other services tailored to them. Another said she reinstated her membership after learning about the association’s initiatives.

“We are very encouraged by the early results,” says Refo, a partner at Snell & Wilmer in Phoenix who chairs the ABA Standing Committee on Membership.

But Refo and other ABA leaders recognize that the association can do lots more to make inroads among the more than 300,000 lawyers in solo practice, out of a total population of some 1.2 million licensed lawyers. Right now, only about 7 percent of the nation’s solos belong to the ABA.

“The population of lawyers in a solo setting is the largest segment among American lawyers,” says Refo, “so naturally we’re always looking for ways to enhance the value of membership for this important segment of the legal profession.”

In February, the policymaking House of Delegates made solos eligible for the same dues discounts available to government lawyers, judges and lawyers who serve low-income clients.

The House also reduced dues for those groups. Under the new structure, annual dues for solos range from $100 during the first year of practice to $225 when they reach the top of the dues scale in their 10th year of practice. Previously, solos paid between $125 and $399 in annual dues. The new rates become effective with the membership year that starts Sept. 1. In addition, solos and other lawyer members now are able to pay their dues in quarterly installments.

But along with making it less costly for solos to belong to the ABA, the association is pushing to increase the value of that membership.

“Solos need things other lawyers don’t, so our efforts to increase membership value are important because we need to provide them now,” says ABA President Carolyn B. Lamm, a partner at White & Case in Washington, D.C.

Currently, services for sole practitioners are provided largely through the General Practice, Solo and Small Firm Division. The division sponsors the popular SoloSez discussion forum on the Internet, and distributes the monthly GPSolo magazine and the quarterly Solo e-mail newsletter.

Now the ABA is introducing a new electronic publication, titled Smart Soloing, which will be sent by e-mail eight times a year to all members who have registered as sole practitioners. And ABA Publishing has produced a new e-book—Smart Soloing: How to Build Your Practice—exclusively for solos.

The ABA also will present Smart Soloing School, a three-day series of free Web-based CLE programs for sole practitioners, from Sept. 28 to 30. After being presented live, the programs will be available online over the next 12 months.

The ABA plans to launch its new online Solo Center in early August. The center will give solos a central point of access on the ABA website. After its launch, the Solo Center will undergo further modifications as part of the ABA’s redesign of the entire association website, which is scheduled for implementation in early 2011.

The ABA also will continue to pursue other membership initiatives, says Lamm, whose presidential year ends in August at the close of the 2010 annual meeting in San Francisco. “Membership is the ABA’s top priority this year,” she says, “and is sure to be for the next several years to come.”