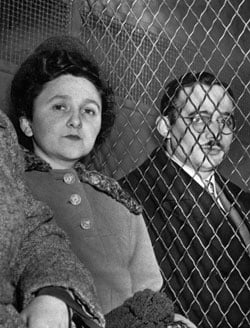 The espionage trial of Julius and Ethel Rosenberg began on March 6, 1951, in the Southern District of New York. The prosecution’s chief witness was Ethel’s brother, David Greenglass, a former machinist at the Los Alamos nuclear installation. Greenglass, who had been named in the same indictments brought against the Rosenbergs, had already pleaded guilty to conspiracy to commit espionage. • He testified that, at Julius’ behest, he had provided detailed information on the atomic bomb being developed at Los Alamos. He also claimed Ethel had typed up handwritten notes he’d provided, a crucial element in the thin case against his sister. • The Rosenbergs denied all charges and refused to implicate others. Seven days after they were convicted, Judge Irving Kaufman sentenced the couple to die, declaring them guilty of a “crime worse than murder.” Over the next two years, the Rosenbergs’ lawyers pursued, to no avail, numerous avenues of appeal. On June 19, 1953, just hours after the high court vacated an eleventh-hour stay independently granted by Justice William O. Douglas, the Rosenbergs were executed at Sing Sing prison.