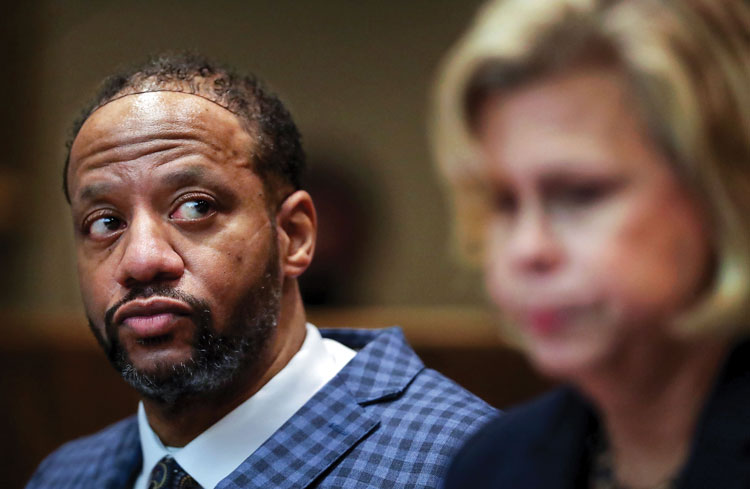 In February, Pervis Payne was resentenced to two concurrent life sentences, and he could be eligible for parole in five years. He has maintained his innocence in a double murder case for more than three decades. (Photo by Patrick Lantrip/Daily Memphian via AP)

Death penalty cases are difficult. The crimes are often shocking, and justice for the victims and their families is always a concern. The ABA does not take a position on the morality or constitutionality of the death penalty. But it is committed to ensuring capital punishment is applied in a fair, unbiased and accurate manner, including engaging with governments to ensure due process.

In 1986, the ABA founded the Death Penalty Representation Project to recruit pro bono counsel for unrepresented death row prisoners. Its work has since expanded, but its singular focus remains improving the quality and availability of legal representation for people facing possible death sentences.

The ABA’s capital punishment advocacy involves the executive, legislative and judicial branches, along with educational efforts. The DPRP works with the ABA’s Governmental Affairs Office to send advocacy letters and provide testimony before legislative bodies and in individual cases. It works with the ABA General Counsel’s Office on the submission of amicus briefs in death penalty cases raising significant legal or procedural concerns. The DPRP has also developed trainings for government officials so they can better understand the intricate process of considering clemency in these cases.

Nearly half the ABA letters sent over the past five years have preceded an executive reprieve or judicial stay. One example is Kevin Cooper, who was convicted of a quadruple murder in California but asserted he was framed. As the ABA recommended in a 2016 letter, the state ordered DNA testing and reviewed Cooper’s innocence claim. In May 2021, Gov. Gavin Newsom signed an executive order calling for an independent investigation that is still pending as part of evaluating Cooper’s clemency application.

The ABA also weighs in on legislative issues. In March 2021, the ABA wrote the Tennessee House of Representatives in support of a bill that provides a way for people with intellectual disabilities to establish that, under a 2002 U.S. Supreme Court decision, they are not eligible for the death penalty. Atkins v. Virginia found such executions violated the Eighth Amendment’s ban on cruel and unusual punishment.

The Tennessee bill responded to the case of Pervis Payne, an intellectually disabled person who had maintained his innocence throughout more than three decades on death row. Because of his disability, his execution would be unconstitutional, but no mechanism existed to adjudicate his claim. In May 2021, Gov. Bill Lee signed a bill allowing people to challenge their death sentences on intellectual disability grounds.

The ABA also shares its unique expertise about effective capital case representation with state agencies. For example, the DPRP provided guidance to the Idaho Public Defense Commission as it considered revisions to its capital counsel appointment standards. The legislature later approved standards that require counsel to have qualifications consistent with the ABA’s capital defense guidelines. The DPRP has provided similar information to other states.

The ABA submits amicus briefs reflecting ABA policy in death penalty cases when it has due process or legal concerns. These briefs are drafted by volunteer lawyers in consultation with the ABA General Counsel’s Office and the DPRP.

In 2016 and 2018, the ABA filed amicus briefs with the U.S. Supreme Court in the case of Bobby Moore, an intellectually disabled man originally sentenced to death 42 years ago after a fatal shooting during a Houston robbery.

Moore’s lawyers initially argued their client could not be executed because he is intellectually disabled according to currently accepted clinical definitions, as opposed to the Texas courts’ outdated criteria. In 2017, the high court struck down Texas’ use of nonclinical standards. In 2019, Moore returned to the Supreme Court after the Texas courts refused to set aside his death sentence. The court again reversed the state court’s decision. Moore was resentenced to life in prison and paroled in 2020.

During the COVID-19 pandemic, the DPRP wrote declarations that attorneys used to extend deadlines or request stays of execution in death penalty cases by documenting how the pandemic was preventing effective representation at both the trial and habeas levels.

For example, a capital case set for trial in Missouri in early 2022 was delayed until mid-2023 after counsel filed a motion for a continuance, using the ABA’s declaration to support the need for more time to prepare. Similar ABA declarations also have been used in other states.

ABA engagement does not end upon conviction in capital cases. The ABA Capital Clemency Resource Initiative, created in 2015, addresses the lack of resources and expertise available to capital clemency practitioners and decision-makers. It provides materials to guide stakeholders through this last crucial phase of the death penalty process. Last year, for example, it presented training to the Oklahoma Pardon and Parole Board.

ABA advocacy helps achieve justice in capital cases by ensuring adherence to the rule of law and due process requirements for those sentenced to the ultimate punishment.

This story was originally published in the June/July 2022 issue of the ABA Journal under the headline: “Matters of Life and Death: ABA advocacy helps ensure constitutional protections in capital cases.”

This report is written by the ABA's Governmental Affairs Office and discusses advocacy efforts by the ABA relating to issues being addressed by Congress and the executive branch of the U.S. government.