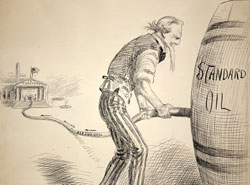 Photo courtesy of Library of Congress

Within a decade of its formation in 1870, John D. Rockefeller’s Standard Oil had secured a virtual monopoly over U.S. refineries and pipelines. It aggressively extended its control over the fledgling oil industry and, in 1882, the firm was reorganized as a trust—a murky legal labyrinth that served as a blueprint for the industrial monopolies that came to dominate the Gilded Age economy.

In 1906, the government filed suit to dissolve Standard, naming more than 60 affiliated firms as defendants in a conspiracy to restrain trade through various means, including rail rebates, predatory pricing and industrial espionage.

Three years later, a federal circuit court in St. Louis held that Standard and more than 30 subsidiaries had violated the Sherman Antitrust Act. The ruling was upheld by the Supreme Court, and the firm was ordered to dissolve in six months. The di­ves­ti­ture did little to foster competition within the industry, but it greatly enhanced the fortunes of Rockefeller and his associates, leading Teddy Roosevelt to wryly observe, “No wonder that Wall Street’s prayer now is: ‘Oh Merciful Providence, give us another dissolution.’ ”