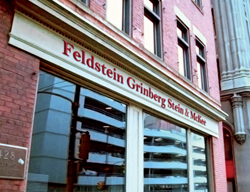 “We’ve got a great flow of foot traffic, and we need to be taking advantage of it,” she adds.

“We’re trying to get name recog­nition, and there’s not … any easier thing to do than put a sign on the door.”

Feldstein Grinberg decided to take an innovative, inexpensive approach and asked neighboring Art Institute of Pittsburgh students to help with their sign design and place­ment strategy. Advertising and graph­ic design students from the school worked in pairs, com­peting for cash prizes.

Ultimately, in December, the law firm selected two first-place teams, paying each $750. The team that came in second received $300.

The two first-place teams were asked to combine their ideas for a final product. Smith, who chairs her firm’s estate administration practice, estimates that if a professional company did similar work, it would have cost at least $5,000.

“The other factor is that it was important as a law firm to be part of the community of downtown Pittsburgh,” she says, “and the contest was a way to improve our re­lationship with the community.”