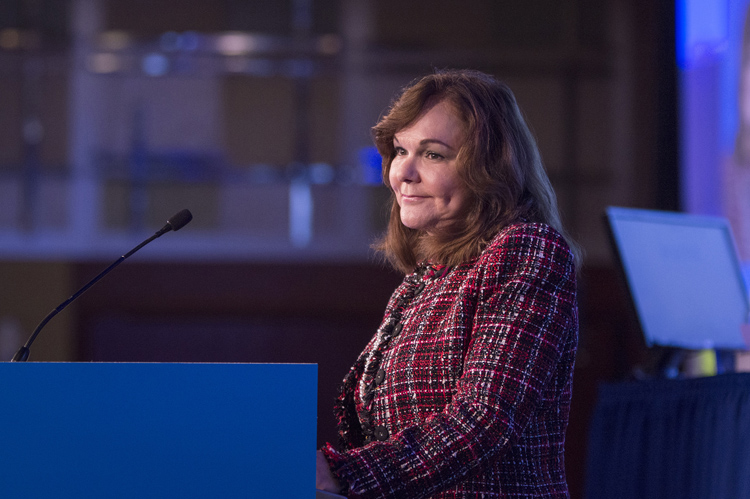 In her speech before the House, outgoing ABA President Hilarie Bass urged delegates to adopt the resolution. Photo courtesy of ABA Media Relations.

The majority of ABA members will be seeing lower dues for fiscal year 2020 under a new membership model approved at the ABA Annual Meeting in August.

Under the new structure, there will be five price points for the basic level of dues-paying membership for fiscal year 2020, which begins in September 2019. The categories include the following types at the following rates:

If a member fits under multiple categories, they’ll qualify for the least expensive dues amount. For example, a solo who has practiced more than 20 years would pay $150, and a government attorney in their third year of practice would be charged $75. However, this is a basic outline, and not a comprehensive list.

Membership will continue to be free for students. Currently, new bar admittees are given a year of free membership, but that would end. Others could see increases of about $5 per year. But the majority of ABA members would end up paying less, with reductions from about $20 to more than $300.

There will continue to be additional charges for joining most individual sections and forums; but in another major change, it will be free for all members to join the Law Practice Division and the Solo, Small Firm and General Practice Division, colloquially known as GPSolo. Membership in these two divisions would be opt-in.

In Resolution 177 and an accompanying bylaw amendment, 11-12, the House provided the approval for the new dues structure as part of the new membership model approved by the Board of Governors.

The new proposal seeks not only to lower the cost of ABA membership for most members but also to increase the value of that membership. To that end, much of the ABA-produced material now publicly available will be put behind a members-only paywall. At the same time, other content that members may have had to pay additional fees for will be made available without cost, such as many LPD and GPSolo materials and an in-creased offering of free CLE. The Center   for Professional Responsibility would also make its ABA ethics opinions freely available to members, as well as its back catalog of online CLE.

An expanded CLE marketplace is another goal of the membership model, with entities being encouraged to produce more online CLE content. Some content would be free to members, while some would be for sale.

A redesigned ABA website, which is in the process of being rolled out, will serve a key function in the new model. In addition to partitioning content behind a metered paywall that would reserve that material for members, a major goal for the redesigned site will be to provide a personalized experience to each user.

When the ABA’s marketing consultant, Chicago-based Avenue, conducted its research into member needs, the ABA’s outdated website and the difficulty of finding information specific to an attorney’s practice were highlighted as an area for improvement.

“There is broad agreement that high-quality content drives the ABA’s value,” Avenue’s report to the Board of Governors reads. “Yet there is also a consensus that our current content experience is difficult to navigate, especially for new members who are unfamiliar with the ABA section model, and it is overly reliant on traditional content forms and outdated technology.”

Under the proposal, real focus would be placed on tailoring the website for each user. Members would be able to see a dashboard with curated content relevant to their individual interests, practice areas and stage of career rather than having to search under a specific ABA entity’s page. Some specialized content would still require entity membership, but more would be made available to the base membership and content would be easier to find.

The changes to dues and to the membership model were made in response to a long-term decline in dues-paying members. Although the Standing Committee on Membership reports that the ABA saw a 2.6 percent increase in the number of members in 2018 compared to 2017, as of June only about 185,000 of the nearly 400,000 members paid dues. That is a 4.4 percent decrease from fiscal year 2017, and dues revenue was down by $1.3 million as of July 20.

“Part of the decline in lawyer counts is the ongoing impact of the nearly 30 percent decline in law school enrollment, which began in FY2011, and is now moving through the young lawyer pipeline,” wrote Tracy Giles, chair of the membership committee, in his July 25 report to the board.

As part of the restructuring earlier this year, the ABA reorganized under nine centers aligned with its four goals.

The staff was reduced by about 50 people through a voluntary separation incentive program for long-term staff members, layoffs and eliminated positions. The Board of Governors also conducted a review of ABA entities and decided to reduce or discontinue general operations funding for more than a dozen.

These measures were taken to cut expenses, but the new membership model is intended to raise revenues in the long term through an increased dues-paying member base.

ABA Treasurer Michelle A. Behnke presented the Board of Governors with a budget for fiscal year 2019 of $89 million in expenses, a $7.1 million reduction from the 2018 budget. Behnke anticipates that by meeting this budget, the association may see a modest surplus by the end of the year.

Estelle H. Rogers, a delegate for the Section of Civil Rights and Social Justice, submitted a salmon slip to speak in opposition but told the House that rather than arising to speak against the new dues structure, she wanted to communicate to her fellow delegates it wouldn’t be a complete solution to the issues facing the ABA. She urged attendees to make sure the ABA stood for important issues. “This is not just about money; it is also about defending liberty and pursuing justice,” Rogers said.

Updated on Oct. 7 to clarify that the list of lawyer types under the dues categories is partial, not comprehensive.

This article was published in the October 2018 ABA Journal magazine with the title "A New Deal."