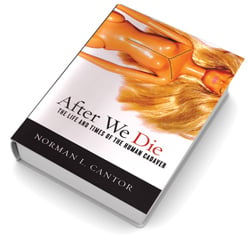 Some may accuse Norman Cantor of being a bit morbid, but the retired Rutgers law professor says his new book is just a mere continuation of his nearly 40 years of study about end-of-life issues.

After We Die: The Life and Times of the Human Cadaver gives detailed answers to questions about the process of death and dying. It also answers a few other death-related questions like how long it takes for a corpse to decompose (not long) and what, if anything, can be done to prevent it (not much short of plastination).

But most intriguing is Cantor’s contention that the dead—through a combination of law and custom—may retain a “quasi-human status” that affords them certain rights, including the right to a decent disposal in accordance with their former inhabitants’ wishes and the right to rest in peace. Cantor concedes that an aggrieved corpse could not assert its rights, nor make any compensable claim for pain or suffering. But, he argues, next-of-kin might have legally cognizable claims for damages done to the survivors’ feelings.

Cantor first became interested in the rights of the deceased after the 1973 death of his stepbrother, a flamboyant criminal-defense lawyer who had left elaborate instructions for a New Orleans-style funeral—complete with a Dixieland jazz band—at his Trenton, N.J., wake. The stepbrother got the send-off he wanted, and Cantor soon moved on to other matters.

But the 2002 court battle over the fate of Major League Baseball great Ted Williams’ remains rekindled Cantor’s interest in death. He began researching the material that became the basis for this book after his retirement from Rutgers in 2005.

To those who think Cantor’s field of study is morbid, he says think again. Death, he says, “is stimulating and thought-provoking.”