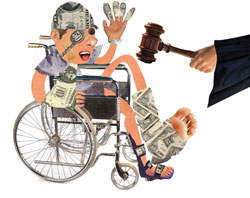 Tye Ward was riding his four-wheeler on a road in north-central Tennessee in February 2012 when he noticed that his cousin, Kaitlin Ward, and her friend, Maykayla Gummo, both 15, had driven off an embankment, landing in a creek 80 feet below.

Ward, 17, had to drag his cousin out of the water, and he pulled Gummo, whose arm was mangled, to safety, according to news reports.

Gummo lost part of her left arm, broke her femur and fractured her back, reports said. The girl’s mother, Andrea May Gummo, called Ward her hero for saving the two teens.

Yet in July, Andrea Gummo sued Robert and Shelaena Ward, who owned the four-wheeler, over her daughter’s “catastrophic” injuries. Andrea lives in Texas, so Gummo v. Ward was filed in federal court in the Middle District of Tennessee because of diversity jurisdiction.

But Tennessee is one of several states that have adopted legislation capping damages on tort suits. Under the Civil Justice Act of 2011, noneconomic damages are capped at $750,000 and punitive damages at either twice the amount of compensatory damages or at $500,000, whichever is greater.

“This legislation removes one of the few advantages surrounding states had,” Gov. Bill Haslam told reporters, “and makes our state even more desirable to businesses as we go out and sell Tennessee as the best place in the Southeast to do business.”

In response, Gummo’s attorney challenged the constitutionality of the statute, claiming the cap violates the right to trial by jury enshrined in the Tennessee Constitution.

“The right to trial by jury includes the right of the jury to determine the amount of damages,” says Nashville-based attorney David Randolph Smith. “When the legislature imposes damage caps, it removes the power of the jury.”

“The Tennessee Constitution is the most jury trial-friendly state constitution,” Smith explains. “It provides that the right to trial by jury shall remain ‘inviolate’ and … reiterates its importance in [a second] provision.”

Smith has asked a federal district court in Nashville to certify the trial-by-jury question under the state constitution to the Tennessee Supreme Court, which will decide that constitutional law question while the rest of the case remains in federal court.

The Volunteer State is only the latest one to bring damage cap legislation into court. The Missouri Supreme Court ruled last year that the state’s noneconomic damage limits were unconstitutional. In Kansas, however, the supreme court upheld a cap last year as a way to further the public interest in ensuring affordable and available health care and reduce the cost of malpractice insurance.

Yet critics of capping damages counter that people harmed by the negligence or recklessness of others deserve to be compensated for their pain and suffering. The jury system exists to compensate people who have been wronged, they say.

Legal challenges involve aspects of state constitutional law—separation of powers, due process, equal protection and, prominently of late, the right to trial by jury.

Smith hopes that in Gummo the federal court will follow the reasoning of the Georgia Supreme Court in a 2010 decision, Atlanta Oculoplastic Surgery v. Nestlehutt, which invalidated a similar Georgia law based on a state constitutional right to a jury trial.

In the Missouri case, Watts v. Lester E. Cox Medical Centers, the state high court ruled 4-3 that the law capping noneconomic damages at $350,000 “is unconstitutional to the extent that it infringes on the jury’s constitutionally protected purpose of determining the amount of damages sustained by an injured party.”

Deborah Watts had filed suit for malpractice, alleging that a delay in receiving an emergency cesarean section led to her son Naython being born with devastating brain injuries.

Other state high courts reached different results in similar cases. In October, the Kansas Supreme Court upheld a state law limiting noneconomic damages to $250,000 from state constitutional law challenges in Miller v. Johnson. The ruling arose out of a medical-malpractice case in which a doctor removed the wrong ovary of the plaintiff. The jury awarded Amy Miller nearly $760,000 in damages, including $550,000 in noneconomic damages. That award was reduced to comply with the state law capping damages.

The state’s high court upheld the cap by a 5-2 vote. The majority rejected a variety of state constitutional law challenges, including the right to trial by jury, the right to a remedy, equal protection and separation of powers. The majority said the cap did not violate the constitutional right to a jury, saying the state legislature has the power to modify common-law rights. For instance, the majority said the legislature had modified the common-law right to a jury trial in workers’ comp and no-fault insurance laws.

Bruce Keplinger, who successfully defended the Kansas law, is puzzled by the popularity of the trial-by-jury argument. “The gist of the argument is that the jury trial right includes the right to have the jury set damages,” says Keplinger of Overland Park, Kan. “There are several problems with that argument. First, there is the common-law remedy of remittitur available to the trial judge,” through which the judge can lower jury-awarded damages.

“Second, there are the numerous statutory limits on jury trials, such as workers’ compensation, no-fault auto claims, state tort claims acts and the like, which remove the right to jury trial altogether or limit the damages that can be awarded,” he says. “If the right to trial by jury is truly ‘inviolate,’ would not these statutes fall as well?”

Supporters of caps say they provide predictability, lower insurance rates and give stability to the legal system. “The chief public interest served by caps is predictability,” Keplinger says.

Tort reformers insist that capping damages by law is a valid way to reform the civil justice system. “There is no judge or jury who can put a number on something as subjective as pain and suffering,” says Darren McKinney, director of communications for the Washington, D.C.-based American Tort Reform Association.

“Limiting awards for subjective, noneconomic damages is one means to reduce incentives for bringing meritless lawsuits,” says McKinney, “and that’s a step in the right direction when it comes to reforming our civil justice system.”

McKinney believes the fights will continue in different states. “Plaintiffs lawyers desperate to keep their golden goose alive will use any constitutional-based argument they can when trying to overturn limits on noneconomic damages. They have every economic incentive to do that.”

Roger A. Johnson, the Joplin, Mo.-based attorney who represented Watts, calls it “odd that ATRA talks about golden geese and economic incentives, when what is really at the heart of overturning bad legislation is protecting constitutional freedoms and individuals like Naython Watts.”

Johnson adds, “ATRA thinks in numbers for their insurance company sponsors. Most of my clients care about preventing catastrophe from happening to others like what has happened to them.”

The American Bar Association has long opposed caps. But the legal battle may not end with state constitutional challenges to various statutes. Both sides may instead focus on amending state constitutions. In Texas in 2003, voters approved a constitutional amendment that authorizes the ability of the legislature to limit noneconomic damages.

However, other states—such as Arizona, Arkansas, Kentucky and Wyoming—have provisions in their state constitutions that prohibit the limitation of damage awards.

In print and initial online reports of the story "Flipping Caps," April, the ABA Journal incorrectly reported the Kansas Supreme Court's vote in the October 2012 decision in Miller v. Johnson. The court upheld the medical-malpractice cap by a 5-2 vote.