Loss of his notes in the Sept. 11 WTC attacks didn't stop lawyer from completing new book 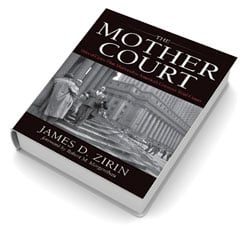 When James Zirin was a college student, he was “an inveterate court-watcher” who spent his breaks watching real-life dramas unfold in the U.S. District Court for the Southern District of New York.

His early experiences—he later spent three years as a Manhattan federal prosecutor—made Zirin a lifelong fan of “the Mother Court,” so called because it’s the oldest federal court in the country.

Zirin argues that it’s also the greatest in his book, The Mother Court: Tales of Cases That Mattered in America’s Greatest Trial Court, which details some of its most important and high-profile cases of the last century. The book from ABA Publishing is being released this month.

Most of the book is organized according to the topics of notable cases heard in the Southern District, including the Red Scare, the Mafia, obscenity, press freedom and accounting fraud. Zirin says he chose cases he thought were metaphors for American society during the tumultuous postwar period.

“When you link all these cases together, you can draw some inferences about what our country was like,” he says.

Along the way, Zirin met some notable people. Among them was famed former U.S. attorney Robert Morgenthau, who gets his own chapter and also wrote the book’s foreword. Another chapter is dedicated to some of Zirin’s favorite judges in the Southern District.

Perhaps the most personal chapter is “U.S. v. Them,” a look at the Sept. 11 terrorist attacks. The first part of the chapter is a firsthand account of the day—Zirin had an office in the World Trade Center, but he wasn’t in it. He lays out a powerful argument in the second part that makes the case that the resulting trials should have been held in New York City.

Calling himself “a card-carrying Mother Court-ist,” Zirin argues that without the civil rights safeguards of civilian court, military verdicts will always be shadowed by doubts and criticism.

Zirin doesn’t avoid opinions that could be controversial, but his passion is largely focused on the Mother Court. Despite the loss of files destroyed with his office, he was able to remember the names and details of many important cases.

“[The book] reflected my experience,” he says. “It’s kind of a history enhanced by intimacy.”

This article originally appeared in the June 2014 issue of the ABA Journal with this headline: “The Mother of All Courts: New book chronicles notable cases and personalities from the federal court of New York City.”