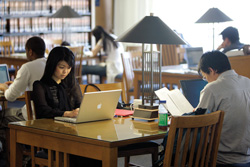 In a new environment for CLE, the ABA will continue to meet the education needs of lawyers at all stages of their careers. Photo by AP Photo/David Duprey.

After 65 years, the ABA and the American Law Institute have agreed to go their separate ways as providers of continuing education programs to the legal profession.

The agreement to end the joint arrangement had been anticipated in recent months as the two organizations evaluated their roles in the CLE field. The ALI Council voted in March to dissolve ALI-ABA Continuing Professional Education. The ABA Board of Governors took similar action in April.

Both organizations said they will continue to offer CLE programming. The ALI has renamed its legal education component ALI CLE. The ABA, which already provides some 700 accredited CLE programs a year for lawyers in the United States and around the world, plans to expand those offerings into an even broader spectrum of legal professional development.

“ALI-ABA has been a leader in continuing legal education for 65 years, and together the ALI and the ABA have helped lawyers to learn and grow at every stage of their careers,” said ALI President Roberta Cooper Ramo in an announcement issued by the ABA on April 19.

“Education is an important part of the ALI’s mission and we will continue to offer professional education of the highest quality,” said Ramo, a past ABA president and a shareholder at Modrall Sperling in Albuquerque, N.M.

The ALI is the leading independent organization in the United States producing scholarly work to clarify, modernize and improve the law. The institute’s restatements covering numerous legal areas are highly regarded references.

Speaking for the ABA, President Wm. T. (Bill) Robinson III said, “Bar associations have a responsibility to provide continuing legal education and professional development activities to their members and the profession at large. We are thankful to ALI for joining with us to deliver early on that front. We will shine a light on this bright piece of our history as we continue to share our expertise and valuable educational content through these programs with the profession at large.” Robinson is the member-in-charge of the Florence, Ky., office of Frost Brown Todd.

The joint arrangement between the ALI and the ABA began in 1947, when a demand for legal refresher courses for lawyers returning to practice after serving in the military during World War II helped raise awareness of the need to make continuing education available to the entire profession. The two organizations formed ALI-ABA after the bar association asked the institute to create the first national program of CLE. For decades, ALI-ABA provided programs, and helped state and local bars build their own continuing education structures.

A lot can change over the course of 65 years, and that has been the case in the CLE field. Starting in the mid-1960s, states began requiring CLE for lawyers—mandatory CLE is now in effect in all but a few states. Meanwhile, ABA sections, divisions and other entities became more active in creating CLE content. Technology has created a growing number of platforms for delivering CLE programs.

Today, Rives says, “the ABA is a recognized leader in CLE. We have platinum content and a great ability to deliver it.” In a new environment for CLE, the ABA will elevate its efforts to meet the education needs of lawyers at all stages of their careers.

“In the future, the ABA will be asserting its leadership role in the broad area of professional continuing education for attorneys,” says Rives. “We will focus our resources on a full spectrum of legal professional development, and we will provide enhanced leadership in this critical area.”