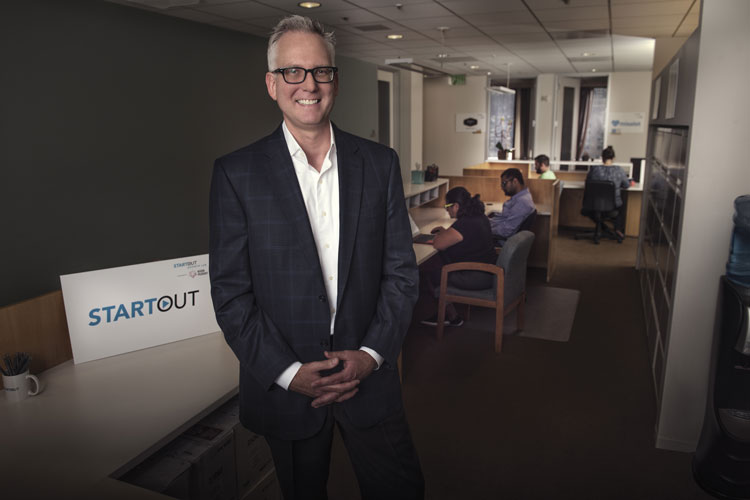 Thomas Gaynor is the mastermind behind StartOut Growth Lab. Photo by Jayms Ramirez.

What started as a discussion about lack of funding opportunities for LGBTQ entrepreneurs evolved into a full-service incubator at Nixon Peabody’s San Francisco office. The white-shoe firm is now home to a rainbow crew of LGBTQ startups, with seven already part of the new StartOut Growth Lab and about a dozen in the pipeline.

“High-quality legal advice is often a challenge for any startup,” says Thomas Gaynor, managing partner of the firm’s San Francisco office, who initiated the tech incubator project. A gay rights activist for 30 years, Gaynor was concerned about the opportunity gap for LGBTQ-led businesses, particularly in tech.

So in March, the firm of 650 attorneys worldwide partnered with StartOut, a nonprofit founded in 2009 in San Francisco and New York City that supports LGBTQ entrepreneurs. The firm committed 2,300 square feet of office space to the project. The inaugural group includes a social networking app and platforms for cybersecurity and video-centric marketing. Each company has at least one LGBTQ founder.

The incubator offers free development and legal advice, important services that can financially cripple fledgling companies, plus monthly events addressing themes such as business development and intellectual property. Participants are coached and mentored, with the goal of creating growth plans and attracting funding.

Gaynor says the gay community has progressed by leaps and bounds in terms of civil rights, but “economic independence is really the next stage.” Gaynor notes that tech’s “bro culture” can shield LGBTQ startups from getting ahead, drawing a comparison to disparities in the legal industry: “You can probably count on two hands the number of LGBTQ people running major law firms at this point.”

Offering up office space to the incubator was a no-brainer for Nixon Peabody, which, according to Gaynor, “has in its core DNA a commitment to equality and diversity.” And in a tech landscape that favors risk and produces a tiny proportion of so-called unicorn companies, it’s also an exciting opportunity for the firm.

“It’s not predictable who’s going to be the wonder project or wonder product that comes out. But wouldn’t it be wonderful if that happens as part of the StartOut Growth Lab?”

This article was published in the December 2017 issue of the ABA Journal with the title "Firm Opens Technology Incubator: Partner creates more economic opportunity for LGBTQ entrepreneurs."