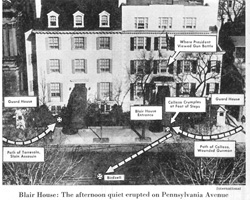 On Oct. 30, 1950, a group of armed insurgents attacked the Old San Juan residence of Luis Muñoz Marin, the first elected governor of Puerto Rico. The abortive assassination attempt was part of a bungled coup d’etat orchestrated by Pedro Albizu Campos, a Harvard-educated revolutionary whose Nationalist Party had for decades sought independence from U.S. control. The uprising was quickly suppressed, but the failure set in motion an even more ambitious contingency plan by the Puerto Rican Nationalists to assassinate the U.S. president.

On Oct. 31, two well-dressed young men, Oscar Collazo and Griselio Torresola, arrived in Washington, D.C., by train from New York City. The two checked into the Hotel Harris separately, but took off together on a sightseeing tour. They cruised past Lafayette Square and Blair House, a two-building mansion on Pennsylvania Avenue where President Harry S. Truman and the first family had taken up residence while the White House was being repaired. As Truman napped on the afternoon of Nov. 1, White House police officer Donald Birdzell was talking to another guard when he turned to see Collazo smacking a pistol that had failed when Collazo had tried to fire at him. The pistol went off and Birdzell was hit. At the same moment, Torresola approached another White House officer, Leslie Coffelt, and shot him three times at point-blank range. While guards and U.S. Secret Service agents exchanged gunfire, pinning Collazo against the front steps, Torresola advanced toward another entrance until a dying Coffelt shot him dead. Collazo was wounded, but recovered to stand trial for his part in Coffelt’s murder. Federal Judge T. Alan Goldsborough sentenced Collazo to death. But in 1952, in an effort to avert any martyrdom for Collazo, President Truman commuted his sentence to life in prison. 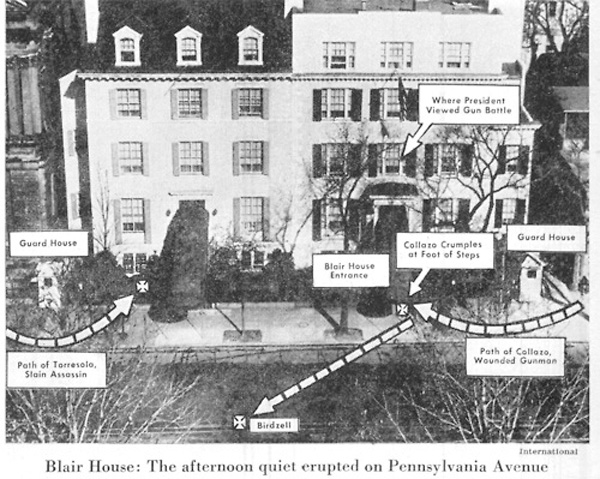 A more viewable version of the map of Truman assassination attempt. ©Bettman/Corbis/AP Images