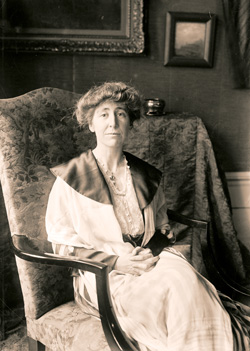 Five months after becoming the first woman elected to Congress, Montana Republican Jeannette Rankin cast one of 50 votes opposing U.S. entry into World War I—much to the dismay of some within the suffragist movement. Yet in 1918, Rankin opened hearings on women’s suffrage with a simple question: How could Congress support a war “to make the world safe for democracy” and still refuse “this small measure of democracy to the women of our country?” But by the time women had gained the right to vote, in 1920, Rankin had been out of office more than a year.

She returned to Congress two decades later at the age of 60. The day after Japanese air forces laid waste to Pearl Harbor, President Franklin D. Roosevelt addressed a joint session of Congress regarding this “date which will live in infamy,” seeking a declaration of war.

Amid a chorus of hisses and boos, Rankin cast the lone vote against the resolution and repaired to her office with the aid of a police escort. She told constituents that she’d voted her convictions, adding in private that she had “nothing left but my integrity.” Although her absolutist stance in response to the ultimate casus belli effectively ended her political career, she remained a tireless peace activist until her death in 1973.