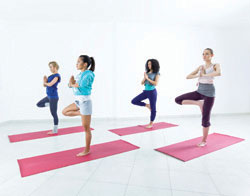 Yoga is known for its zen vibe. But one online yoga provider’s attempt to patent the filmed perspective of streamed classes has caused the normally tranquil community to become decidedly feisty.

YogaGlo, the online provider, sought to patent what it claimed was a proprietary layout of a filmed yoga class: an empty middle aisle with students on each side and the teacher in front. The company asserted that having other class participants in the viewer’s sight lines offered the look and feel of a live yoga class that was unique to the company.

That may be true, but according to professor Jeffrey Lefstin of the University of California’s Hastings College of the Law in San Francisco, courts have long held that “look and feel and ambiance is not patentable.” In fact, Lefstin says, YogaGlo’s whole application seemed “slightly dubious.” The U.S. Patent and Trademark Office apparently agreed. Yet while waiting for word on its application, YogaGlo continuously sent cease-and-desist letters last year to other online yoga companies, including Yoga International.

Filming an exercise class from a first-person perspective with a clear line of sight has been done for decades, Lefstin says.

“If you ask any photographer, they’d tell you it’s ‘obvious to anyone with ordinary skill in the art,’ ” which is the patent law standard. Plus, any earlier filming like that constitutes potential prior art, which would also preclude a patent.

In response to the ruckus, YogaGlo founder Derik Mills assured fellow yogis that he was not trying to patent how yoga classes are taught (which would demonstrate remarkable chutzpah considering yoga has a 5,000-year tradition) or even how DVDs are filmed. Rather, YogaGlo’s patent application simply sought to preserve what it believed was a proprietary filming perspective.

Richard Karpel, CEO of the national Yoga Alliance, suggests otherwise. YogaGlo was trying “to manipulate the legal system in order to suppress competition by bullying other online yoga-instruction businesses and individual yoga teachers into submission when they use a similar method of recording and presenting online classes,” he says. Breathe deeply and say “om.”

This article originally appeared in the January 2014 issue of the ABA Journal with this headline: “Ommmmmm: Online yoga provider’s patent application has enthusiasts up in arms.”