'The Originalist' draws appellate judges to weigh in on Scalia legacy 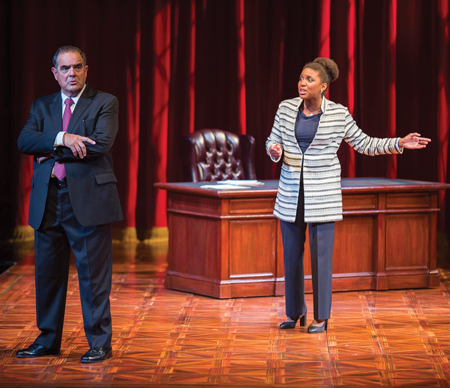 Edward Gero and Jade Wheeler in “The Originalist” at the Pasadena Playhouse. Photo by Jim Cox photography.

“There’s a sanctity to the score. The notes are the notes,” he says. “That is precisely my view of the Constitution.”

Over the next 90 minutes, the audience at the Pasadena Playhouse near Los Angeles gets to hear Scalia defend that view at length with a young, liberal Harvard Law School clerk named Cat (Jade Wheeler) as his foil.

What ensues is a robust debate over the course of the play as the justice and his clerk spar over originalism itself and a slew of major rulings. The two never come to an agreement, but the play shows them developing a mentoring relationship that some might find unlikely. By the end, they like and respect each other. Sort of.

“God, it’s stunning ... to discern the blind spot in a brilliant intellect,” Cat says while trying to convince her boss to soften his dissent in U.S. v. Windsor.

Kozinski, who knew Scalia personally, said the play captures some of the justice’s personality very well. Scalia was brilliant, affable and funny, he said, sometimes self-deprecating and “really, absolutely sure that he was right.”

And Kozinski believes Scalia changed American law, although perhaps not in the way he’d wanted, by legitimizing originalism.

“Before Justice Scalia became a justice, those kinds of arguments were largely laughed aside,” said Kozinski.

For Watford, the play was partially about clerkships—a view perhaps influenced by the fact that he once clerked for Kozinski.

The experience taught him that clerks who challenge their judges can be valuable.

“It’s not so much that someone else is going to change your mind per se, but you want to maintain an open mind,” he said. “And it really does help, I think, to have a law clerk who is willing, as with the actress on stage, to push back.”

Reinhardt, whom some might call a flaming liberal, used his time to denounce originalism. He was careful to point out that he didn’t intend to demean Scalia as a person.

“To say that ‘I have some communication with the original founders and I know what they meant’ is to me an unusual degree of arrogance,” he said.

The Originalist premiered at Washington, D.C.’s Arena Stage in 2015, before Scalia’s death. Strand said the justice never saw the play, though some members of his large family did.

He said Gero did meet and become friendly with Scalia while researching the role. And Justice Ruth Bader Ginsburg attended, Strand said, which led the audience to watch her rather than the play.

This article appeared in the July 2017 issue of the ABA Journal with the headline "Originalism and Its Discontents: Play draws appellate judges to weigh in on Scalia legacy."