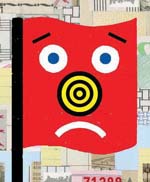 As April 15 approaches and tax lawyer Kelly Phillips Erb discusses deductions with her fellow small-firm lawyers and solo practitioners, she has some words of wisdom for them: “You can be creative and aggressive with tax deductions, and there’s nothing that says you shouldn’t take a legitimate deduction, but you have to fall within the rules.”

Solo and small-firm lawyers tend to be audit targets for the IRS, says the Philadelphia-based Erb.

It’s not so much the practice of law that raises a red flag, Erb says. Rather, it’s the nature of solo and small-firm practitioners’ business expenses that tend to get the agency’s attention.

If you earn more than $200,000 a year, Erb says, you’re three times more likely to be audited by the IRS. Home offices also attract attention, as do multiple deductions.

“The IRS is looking for things that can make you more unusual than everybody else in the same economic tax bracket,” Erb says. “They have a prorated score, and you never want the IRS to think you’re different than everybody else.”

Deductions, she adds, can be confusing. And sometimes lawyers who work for themselves believe that everything they do is a business expense, Erb says, but that is not the case.

CAUTION ON THE ENTERTAINMENT FRONT

If someone claims one golf trip, the IRS probably wouldn’t notice it, Erb says. “But the reality is people don’t claim one—they claim 10, and that’s when the IRS starts looking at itemized deductions.”

Erb advises clients to note on the back of a receipt what expenses are for on the same day the money is spent. Then, she says, scan the receipt’s front and back, or keep it in a file with other expense-related receipts.

“Don’t let it pile up. Unless you’re really good about annotating receipts, you’ll forget what it’s for.”

And don’t count on deductions to make your ultimate tax total palatable, says Saba Ashraf, a tax partner with Troutman Sanders in Atlanta. She advises solo and small-firm practitioners to set aside 50 percent of their income for tax purposes.