Playing on Home Court: New York and Delaware May Lose Their Grip on Bankruptcy Cases 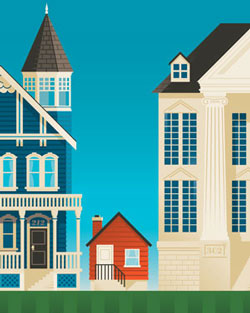 Dynegy, a Houston-based energy company, and American Airlines, headquartered in Dallas, are two multibillion-dollar corporations that filed for Chapter 11 bankruptcy protection in November. Their restructurings are predicted to be lengthy and complex, meaning that legal fees could approach $100 million each.

But for Texas-based law firms, the big payday remains a distant fantasy. That’s because the two businesses filed for bankruptcy protection in New York City. The law firms leading the bankruptcies are based in the Big Apple and Chicago—not in the Lone Star State.

Many bankruptcy lawyers across the country say the Dynegy and American Airlines cases expose a flaw in the bankruptcy code that allows businesses seeking to restructure and reorganize to do so in jurisdictions where the companies have few or no assets or business operations.

A bipartisan group in Congress is pushing legislation that would shift scores of corporate bankruptcies away from Delaware and the Southern District of New York—the two busiest bankruptcy courts—to cities nationwide.

The result could mean a shift in hundreds of millions of dollars in revenues from national and New York City-based law firms to local and regional bankruptcy practices in Atlanta, Boston, Dallas and San Diego.

“Most lawyers outside of Delaware and New York like this legislation a lot,” says Lou Strubeck Jr., a bankruptcy partner at Fulbright & Jaworski in Dallas. “We would see a significant jump in major bankruptcies filed in Texas if this passes.”

Nowhere is the advocacy supporting the legislation stronger than in Texas and Massachusetts. In October, the Boston Bar Association officially endorsed the reform in an effort to end forum shopping.

“Requiring that a corporate bankruptcy take place locally ensures that the distinct needs of the most directly affected community are not overlooked—or, worse, ignored by a group of professionals who live and work hundreds, if not thousands, of miles away,” the association said in a statement.

In 1979 Congress amended Chapter 11 to allow companies to seek to restructure their debt in the state of their incorporation, which allowed corporations to venue-shop for the most favorable jurisdictions.

Hundreds of companies filed in Delaware and New York during the past three decades. Bankruptcy judges there developed reputations for being pro-debtor and for favoring financial institutions in disputes against creditors, according to many lawyers.

Bloomberg News reported recently that Delaware receives more than $100 million in economic benefits from its bankruptcy docket. “It became the full employment act for bankruptcy lawyers in Delaware,” Strubeck says.

University of North Carolina law professor Melissa Jacoby testified before Congress in October that more than 70 percent of the 200 large corporations that have filed for bankruptcy since 2005 have done so in Dela ware or New York.

“There’s no reason to send a hometown company to Delaware, where it clearly adds to the expense of the case,” says Tom Howley, a partner in the bankruptcy section at Jones Day in Houston. “Delaware has made an industry of handling bankruptcies for out-of-town businesses.”

Many companies file in Delaware or New York, Howley says, because corporate executives and boards view the judges in those jurisdictions as more predictable and thus being “the safe choice.”

Tom Horton, the CEO of AMR Corp., American Airlines’ parent, says that was the reason his company filed in New York instead of Fort Worth.

“We think New York is the right place for this,” Horton says. “They have a very experienced bankruptcy venue up there.”

As a result, the significant players—bondholders, hedge funds buying the debt, banks doing the financing, and the legal advisers—push companies to file there.

“Commercial lenders and buyers of distressed debt pressure companies to file bankruptcy in Delaware by sometimes telling them, ‘If you want financing, you must file in Delaware or New York,’ ” says Vinson & Elkins bankruptcy partner Josiah Daniel III of Dallas.

Also, major national law firms believe they get paid more when the cases are handled in Delaware and New York, Strubeck says. “The courts in New York and Delaware are used to lawyers charging up to $1,000 an hour,” he says. “But in Dallas and Houston, that’s a lot and the judges will push back.”

Meanwhile, Stephen Karotkin and Harvey Miller—two nationally prominent bankruptcy partners at Weil, Gotshal & Manges in New York—are leading the Chapter 11 efforts for AMR. Weil points out that three partners in its Texas offices are significantly involved in the case.

AMR’s Horton says he selected Weil because the law firm has been its lead outside corporate counsel for many years. “That’s a firm that we know well and feel good about,” he says.

In contrast to the perceived pro-debtor predictability of the Delaware and New York courts, bankruptcy judges in other parts of the country developed a different reputation. For example, former long-serving Dallas bankruptcy judge Harold Abramson prided himself on being unpredictable.

Judge Abramson, who was on the bench for nearly two decades, once described himself in court as “a monkey with a machine gun.” Lawyers say that cities across the country have similar stories about bankruptcy judges in their jurisdictions.

The first push to reform the bankruptcy venue law came in 2001 when Enron filed for bankruptcy in New York instead of Houston, where a great majority of its creditors lived. U.S. Sen. John Cornyn, R-Texas, introduced legislation in 2005 designed to end the bankruptcy obsession with Delaware and New York.

However, efforts to change the law failed, according to lawyers, because Delaware had a powerful advocate blocking reforms: Sen. Joe Biden, who chaired the Sen ate Judiciary Committee.

After Biden became vice president, U.S. House Judiciary Committee Chairman Lamar Smith, R-Texas, seeing an opening, introduced the Chapter 11 Bankruptcy Venue Reform Act of 2011 in July. The act is co-sponsored by the Judiciary Committee’s ranking Democrat, Rep. John Conyers Jr., D-Mich., and appears to be gaining support. It strips away the ability of corporations to file for restructuring and reorganization in the jurisdictions of their incorporation if that is not their “principal place of business” or where they have “principal assets.”

Lawyers say the legislation would reduce the cost of bankruptcy for even midsize companies by as much as $1 million.

“Not being forced to file in Delaware or New York means that you don’t have to hire local Delaware counsel for your client,” says Karol Denniston, a bankruptcy partner at Brownstein Hyatt Farber Schreck in Los Angeles. “It means not having to get on a plane dozens of times to travel to the East Coast for hearings and depositions, and not having to stay in hotels.”

However, some of the nation’s most prominent bankruptcy lawyers believe the legislation is misdirected.

Delaware and New York courts “have developed a reputation for efficiently processing prepackaged bankruptcies,” says Martin Sosland, a bankruptcy partner in Weil’s Dallas office. “And the law in those states is more favorable. I think this bill focuses on a problem that isn’t really a problem.”

Of course, those most adamantly opposed to the legislation are Delaware bankruptcy lawyers. In the words of one who asked not to be identified, “There’s one reason most companies want to file in Wilmington: It’s because we are the most business-friendly jurisdiction in the country and this is where they have the best chance to survive.”