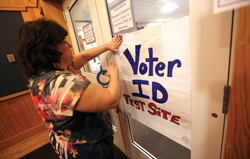 A wave of lawsuits and state legislation could affect whether potential voters will be heard in November’s elections, in a number that some groups say exceeds the margin of victory in previous elections.

Many lawsuits hinge on Section 7 of the 1993 National Voter Registration Act, which requires that states offer voter registration to applicants of public assistance programs, including during telephone, Internet or mail interactions. The NVRA is intended to reach senior and low-income citizens, who are less likely to register otherwise.

“In the early 2000s, compliance started trickling off,” says Neil Steiner, a New York City-based partner at Dechert who serves on the board of trustees for the Lawyers’ Committee for Civil Rights Under Law.

Georgia, for example, recently settled a suit that alleged the state had not been complying with the act during online and phone transactions. According to a coalition of voting rights groups, the result was a dramatic decline in Georgians registering to vote at public assistance offices, dropping from 10,000 in the mid-1990s to 4,430 by 2010, even though applications reached 70,000 a month for Georgia’s food stamp program, just one of the programs covered by the NVRA.

“It’s a bipartisan law,” says Steiner, who negotiated a settlement in Ohio that, he says, resulted in hundreds of thousands of new registered voters. “It shouldn’t be so controversial.”

New voter identification laws, which are burning up the state legislative rolls, are also drawing controversy. More than 30 states require voters to present some form of ID at the polls, many requiring photo IDs.

In Pennsylvania, a coalition of civil rights groups filed a lawsuit in May claiming that the state’s new voter ID law discriminates against residents who lack a driver’s license or birth certificate, mostly because of age or immigration from a foreign country.

And in Florida, four civil rights and voting rights groups filed a federal lawsuit in June seeking to end the state’s effort to purge voter rolls. The groups join two other suits by the American Civil Liberties Union of Florida and the U.S. Justice Department.

The latest suit claims a violation of Section 2 of the 1965 Voting Rights Act, which prohibits discrimination, and Section 8 of the National Voter Registration Act, which says that voting purges must be completed 90 days before a federal election.

In July, the federal government OK’d Florida’s access to the SAVE (Systematic Alien Verification for Entitlements) database. The state claimed it needs the information to compare names in the state voter system to remove noncitizens from the voting rolls.

Meanwhile, a federal court in the District of Columbia heard arguments in Texas v. Holder over the constitutionality of Section 5 of the VRA, which requires federal preclearance of certain municipalities’ voting laws.

Voter ID laws highlight the tension between risking voter fraud and promoting participation. Some argue that the laws are discriminatory, disenfranchising minority and low-income voters who could otherwise potentially influence outcomes. Yet proponents insist the laws preserve the security, fairness and openness of elections.

Strict voter ID laws have become an epidemic, according to Estelle Rogers, advocacy director at Project Vote, a nonpartisan group based in Washington, D.C., that seeks to empower underrepresented voters. “When state legislatures were turned over to Republicans, these bills passed—even though they’d failed before. It’s a fact, not a partisan statement. One political party wants access to be inclusive; one political party is worried about security.”

In the wake of Bush v. Gore, there’s been “a move for increased partisan control of the process,” says Benjamin Griffith, Cleveland, Miss.-based chair of the ABA’s Standing Committee on Election Law. Voter ID laws have been “high on the legislative priority list, especially in 2011 and 2012.”

But according to Rogers, there is little evidence of the fraud these laws are designed to prevent. “It’s combating a splinter with a sledgehammer—and to the wrong hand,” she says. “Real voter fraud is committed by political parties, candidates, groups—not individuals. Plus, these things are much more likely to be a problem with absentee ballots, not in-person voting.”

While ID laws are said to prevent fraud and double voting—such as voting in two states where a voter owns homes—“the only examples of this are usually attributed to poll worker error, like transposing names, signing on the wrong line or mixing up a junior and senior,” Steiner says. The Brennan Center for Justice at New York University School of Law reports there is “virtually no evidence” that individuals engage in the targeted misconduct, which is “very risky and promises little reward.”

Instead, the ID laws have a chilling effect on those less likely to have the required identification: seniors, minorities and low-income individuals, adds Steiner, who is co-counsel on a Wisconsin voter ID case, one of the many suits sprouting from these laws. Voter activists say that the underlying documentation required—such as birth certificates—is difficult or expensive to obtain, making the laws unduly burdensome.

But Cleta Mitchell, a Washington, D.C.-based lawyer at Foley & Lardner and a member of the ABA’s Standing Committee on Election Law, insists there is “no factual evidence” to support the claim that voter ID laws disproportionately affect minorities. The left, she says, makes these claims “while election crimes are disregarded. It absolutely makes my blood boil.”

Many of the laws exclude as valid IDs federally issued veterans benefits cards, Steiner notes. “That means many homeless vets cannot vote. These laws also especially impact elderly women. If they’re older and rural, they were more likely to have been born with midwives at home, so they don’t have birth certificates or perhaps there’s a misspelling on a birth certificate. Even though these women may have served on the town board and voted in every election for the last 50 years, these laws prevent them from voting now” because of the expense or burden of getting a photo ID. In addition to having to pay to acquire or change a name on a birth certificate, something also often needed is—wait for it—a photo ID. “It’s a classic catch-22,” Steiner says.

But, Mitchell asks, “how many of those people are there? It’s outlandish.”

Griffith notes that “the left and right are fighting over numbers” of potential voters burdened by the ID laws. The Brennan Center for Justice estimates as many as 11 percent of eligible voters—more than 21 million people—don’t have government-issued identification.

“Voters may be turned away or receive only a provisional ballot. Or they may decide to stay home because they don’t know the regime and don’t want to make a wasted effort or be embarrassed,” says Project Vote’s Rogers. “If you give them extra hurdles, you’re going to lose them.”

Mitchell counters by referring to the March primary in Tennessee. She says that 645,775 votes were cast and 266 voters were given provisional ballots because of photo ID issues; 112 returned with a required ID, meaning that 154—or .0238 percent—didn’t vote because of the requirement. “The hysteria about voter ID laws is unfounded,” says Mitchell, president of the Republican National Lawyers Association, which details instances of election fraud on its website.

“The bipartisan way to approach these statutes is to include less restrictive alternatives. But finding a middle ground is challenging given the level of political partisanship that’s invaded this process,” Griffith says.